Asura Buster - Eternal Warriors (アシュラバスター -エターナルウォーリアーズ-), a 2000 fighting game by Fuuki that has way too much potential. The game is a sequel to the 1998 arcade game Asura Blade : Sword of Dynasty.

The gameplay of Asura Buster is similar to its predecessor, in which it utilizes a three-button system while using a few of the same battle tactics such as air blocking, short fast dashes, a roll and a jump up after being knocked down, a push back from within blocking, and a two-button launcher attack.
Like its predecessor, Asura Buster has a super gauge system that fills up when time advances. Once that is done, they can then initiate either a Super Move, an EX Attack (which is a powered up variation of a special move) or a Boost Mode (which bestows special traits or characteristics but disables the super gauge).
The combo system in Asura Buster is the same as in Asura Blade, in which moves are chained into more powerful moves, and then into specials.
There are three new mechanics introduced in Asura Buster :

What kind of game is Asura buster?

The game focuses a lot on interactions. stray hits from predictions in neutral can deal as much damage as a basic combo. getting to right position to start a combo is very hard for some characters and requires effort, cunning and planning to reach it

consuming meter leads to very powerful moves, but it can only be built when time advances, so players must be strategic about using it

How do most people play this game?

Asura Buster is primarily played on Fightcade 2, Fightcade is a matchmaking platform for retro gaming, bundled with different emulators for seamless online play. Fightcade is a free application that can be downloaded from the official Fightcade site.

the fbneo training mode has been officially implemented into fightcade, use the "Training" button to display inputs, damage, combos and get infinite health and time

If you are not using fightcade, here's the Github link

Are there any other resources for this game?

Which characters are good for beginners? 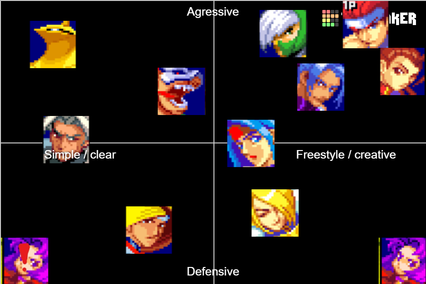 How can I play as Alice! or Nanami ?

Alice! and Nanami are secret characters, to unlock them either play for 1 match or highlight then press start on : 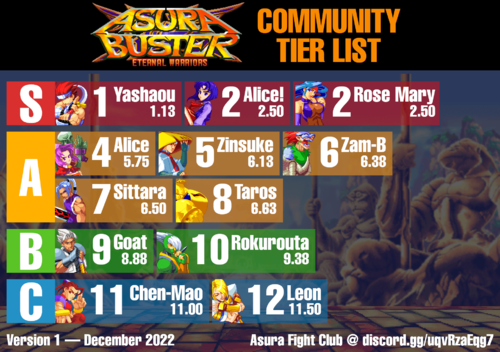 Why shouldn't i play Alice when learning the game?

the difficulty isn't the only issue
when we discussed it we agreed to stop new players from maining her since she doesn't let you learn the game mechanics
when you play Sittara you understand that :