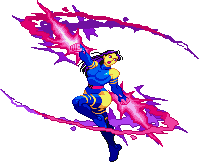 Psylocke can double jump. During a bounce recovery though, this is disabled (yet is not for Cyclops).

Taunt - Psylocke is the only character whose taunt is simply the Start button. Her moving hand is an active hitbox and can do damage, dizzy if the opponent is in the red, and even kill if the opponent has zero vital. It can also cancel standing normals, but not crouching ones. Psylocke remains taunting until hit or the player moves her. 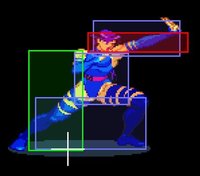 MP: Good range, great to lead with on dashes, and cancel with 4+HK. The pushback from the dash will make the hopback go REALLY far, and from there you can PsyFlash, or even PsyThrust. In juggles it knocks downward slightly.
Start: 3f

HP: In juggles it knocks downward slightly but they'll recover fast. Good poke and great but high hitbox that might have some AA uses since from her fist out, it's only hitbox and no hurtbox.
Start: 4f

LK: In juggle combos it hits them upward slightly. Beyond that, usage is matchup-specific because the hitbox is so high.
Start: 1f 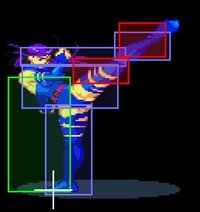 MK: Good, quick self-chainable poke that can also be crouch-canceled. From the boot to around the ankle, it's all hitbox and no hurtbox. Don't hold forward if you're dashing/leading with it, as you might get the cartwheel kick. Acts similar to s.MP in juggles.
Start: 3f

F + MK: A slower kick that takes your feet off the ground, but is NOT an overhead.
Start: 19f 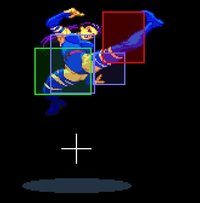 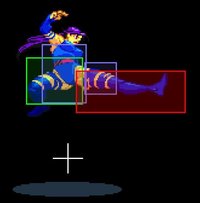 HK: Standing HK can be crouch cancelled. It can also be jump cancelled, but not if you hold up-forward which causes the rollover.
Start: 6f

6 + HK:(keep holding after hit) - Psylocke rolls forward slightly after the hit. If close enough, you can crossover behind the opponent

4 + HK: Start: 37f
Jump back (you're off the ground) slightly, land then kick (you can hold forward after to rollover still). Since you are in the air, you cannot SJ or Ninjutsu Split, but you can still do air specials. You land for the hit, so this is NOT an overhead. A good use for this is to cancel from a dashed, blocked poke. Pushback will make you jump back far, where you can safely Psy-flash depending on what the opponent does. 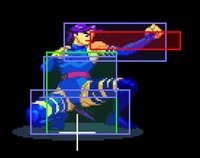 c.MP: Slight juggle if it hits as such but they recover quick so you must be in a position to chain to something else quickly.
Start: 3f 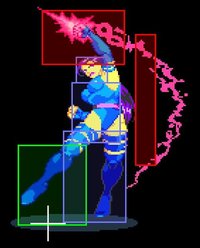 c.LK: Hits low, bad range. You do need to use this if you ever want to give people a reason to block low.
Start: 1f 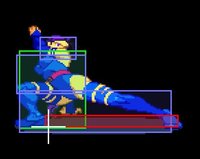 c.MK: A self-chainable mini launcher. Has an odd property where in the left corner, if it hits around startup near the ground, it must be blocked forward and not backward (crossup). This doesn't happen in the right corner. Good for throw resets if they are Light to Medium. Heavy needs multiple ones chained together. Don't try against Superheavy, a few c.MKs, then c.HP is better for them.
Start: 3f 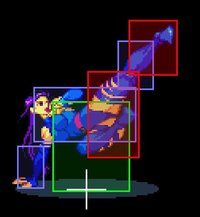 c.HK: Also bad range, but your only other low hitting move. Also the sweep.
Start: 4f

j.LP: Very fast but juggles downwards. Can link onto itself.
Start: 1f 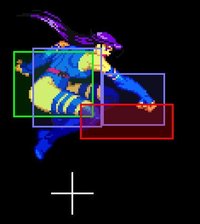 j.MP: Upward striking an juggles upwards. Like most SJ moves, it's momentum dependent, knocking them higher on the way up vs if you are falling down. Recovers fast and can link onto itself.
Start: 3f 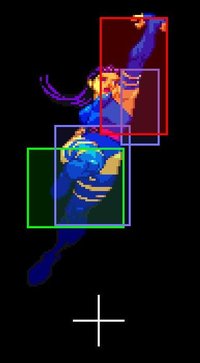 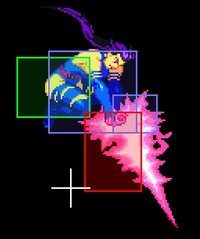 j.LK: Very fast and basically keeps them with you. Can also link onto itself. Using a bunch of these, mixed in with a few j.LPs can make for corner relaunch infinites.
Start: 3f 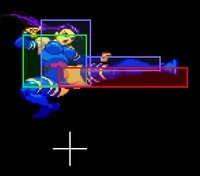 j.MK: Similar to j.MP, except longer recovery and thus no self-link. It also has more forward range than j.MP which is primarily vertical.
Start: 3f 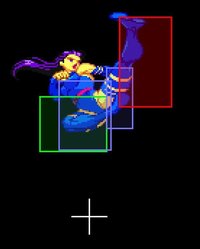 j.HK: Somewhat similar to j.HP, except it's hitbox moves about it's animation, hitting more in front of her than just right below her.
Start: 5f 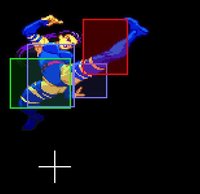 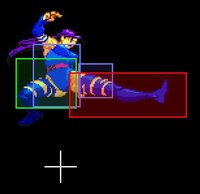 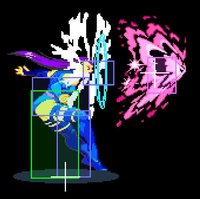 Psi-Blade: D,DF,F+K (ground/air)
Start: 4f | Invul: 4f
LK - Move forward
MK - Move up-forward
HK - Move up, but off a dash you move in a similar (but slightly higher) arc as MK
Each spin can hit 3 times each (should the opponent stay in range), and can go into another strength spin (max 3 spins). EG: LK spin, MK, LK is possible, but LK, LK, LK is not.
Recovery on this move is bad, and can leave you vulnerable sometimes even if it hits. Use with caution and generally not in the corner or high in the air. 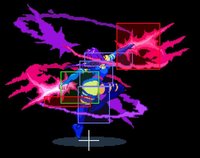 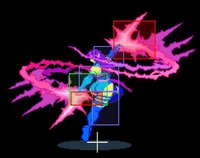 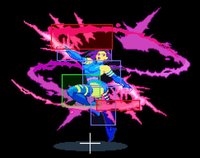 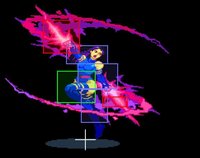 Ninjitsu Split: D,DB,B+K(+ another button to control where your solid is) (ground only)
During this move, even your solid self can pass through the opponent (but can still be hit).
To change where your solid self is, do the motion again, and hit one of the buttons (positions follow the button layout, eg lights put you leftmost, mediums in middle, hards rightmost). You won't have any visual confirmation that your position has changed, and you can change in the air.
Your shadows CANNOT hit the opponent. You can change position while hitting, blocking, or even being hit.
You can build meter while split is active.
Split will end if you are thrown.

Psi-Thrust: D,DF,F+2P (then direction), then direction + punch for another thrust (ground/air)
Startup: 19f | Invul: 7f
A bit of startup (easy to combo however) but no recovery, even on block. After they're hit, the opponent will be in fall stun until they land.

SJ back and psi-flash spam is good for building meter and can be hard for the inexperienced to get around.

Dash s.MP (blocked), back + HK (xx Psi-flash as needed) makes for a good poke and run tactic. Pushback off the blocked attack plus the little backward jump of back+HK takes you quite a ways from the opponent.

Jump forward, j.HP, j.HK can be obnoxious to deal with, and combos on a lot of tall characters. Just be careful of someone jumping up and throwing you.

Corner throw traps (After the second throw, combo to dizzy. Unless the opponent attacks, the throw limiter will prevent another throw attempt):
Feather -
d.c.mk..(slight pause) c.mk, c.hp, jump toward and throw

On ground level, Psi-thrust will go under an MP Psi-blast.
Psi-blast's don't cancel each other. This can make moving around the screen feel almost like a shooter game.

His air fireball spamming can be as annoying, if not moreso than yours. Plus, he throws out two. He has IMMENSE dizzy power, especially on his Hurricane kick.

A big target like Sentinel, he will try to throw you all day, so your strings and positioning must be tight. Shoulder Charge will go through Psy-Flash and at full meter, Guard Cancel Super becomes a concern.

And you thought your normals were gdlk? Optic blast might be slow, but he can zap you through predictable Psy-flashes.

Psi-blast doesn't chip Iceman, or cause him pushback. Iceman is good at controlling space and hitting hard, but incorrect guesses on his part give you a way in.

Hold toward (6) [s.LP, s.HK]x N can repeat a few times. Coil goes right through the Psy-blast, so don't spam it predictably.
Get meter to tech ASAP as he can easily dizzy/kill off a single throw.

Omega Red has an obnoxious pixie crouch that can duck many of your grounded normals, including ones that look like they should hit.
He can duck: c.LP, c.MP, s.MP, s.MK and c.HP. And of course the higher ones like standing lights and s.HP.

[j.HP, j.HK] x N can infinite. Sentinel also can't duck your standing lights, meaning you can keep him pinned an push him in the corner. Sentinel's throw range is ridiculous though, so any gap in your blockstrings means he can attempt to mash throw. If you are without meter to tech, that likely means more than half your life will disappear.

Make live combo videos. Star and Psy-flash cancel each other.
When he has full meter, be careful hanging around the top of the screen as his super will hit you.

Psy-flash spamming can make it hard for Spiral to get swords going, but once she does, she can make it difficult for you to spam Psy-flash. Psy-flash will be cancelled by a sword.

Play who can run away more. Psy-flash and Typhoon cancel each other. Storm's invulnerable frames on her dash may mean she can work her way past your Psy-flashe's easier.

Wolverine can Berserker Barrage under MP Psi-blast at any point. He'll also likely try to belly slide under fireballs.
Once he has meter, guard cancel super is a threat.

Like Omega Red, Wolverine had a very low pixie crouch that can duck many of your grounded normals, including ones that look like they should hit.
He can duck: c.LP, c.MP, and s.MP. And of course the higher ones like standing lights and s.HP. He cannot duck s.MK or c.HP the way Omega Red can.

[s.LP, 6+HK (roll over)] xN can combo in to itself vs a lot of characters. Pushback can become an issue and it doesn't seem to work reliably on superheavies.

Featherweight to Omega Red (corner):
launcher: c.mk, c.hp (there's a tiny pause between these. Listen for the opponent hitting wall and use that as cue if it helps)
aircombo: sj.lk x2(somewhat slowly), sj.lk, sj.mk, sj,hk.. sj.lk, sj.mk (land)
relauncher: c.hp
relaunch modifiers: If you think they're getting too low, add a s.lk before c.hp, and/or delay the sj back up ever so slightly to allow the launcher to maximize it's height. You can also add a c.mk instead, but it must be chained to c.hp quickly.
light and middleweight launchers: d.c.mk..c.mk, c.hp
middleweight/OR relauncher: c.mk, c.hp
OR launcher: c.mk, c.hp.. c.hp
general aircombo modifiers: You can substitute sj.lp for the last sj.lk on the way down, especially if you feel they're getting too high.
If you want to throw in a super in the air, do sj.mp or sj.mp, sj.mk after your sj's apexed and you're on the way down. After the super you have a big window to combo the throw, or you can juggle them back down, or just relaunch if you land first. They'll be in stun 'till they hit the ground. It's better to Super during a super jump rather than while you're on the ground, if you do it on the ground you'll be in normal jump mode when it's over and limited in what you can do, comparatively (unless you're doing the super as part of a low juggle).

Vs. Psylocke Combo Notes: Psylocke has a long OTG time, a somewhat longer time to crash and wakeup for dizzy (leaving longer time to setup combos/positioning), and is vulnerable to sweep juggles.