V-Gauge (often called V-Meter) can be gained in three ways: using your character's V-Skill, Crush Counters, or by taking damage. 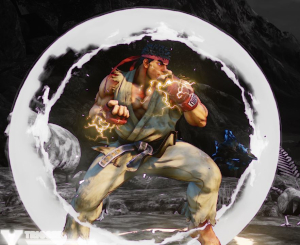 Replacing Ultra's as Street Fighter V's main comeback mechanic, V-Triggers drastically change a character. As of Season 3 each character has 2 V-Triggers to choose from, which can be 1 bar to 3. Some characters have a 2 bar and 3 bar, for some both are 2 bars. Once activated the screen freezes and fades to black slightly, and the character performs a quick pose or attack before returning to the game. Of note is most V-Trigger's have 1 frame of full invulnerability on their activation. V-Triggers can also be canceled (VTC) into from a variety of normals, specials, or EX specials to make unsafe moves such as sweeps safe or even advantageous, in combos to extend them (though this increases the damage scaling), or to simply pause the screen to quickly evaluate the situation and react accordingly such as jump ins. Depending on the V-Trigger chosen, there may be limitations on what you can VTC from altering a character's strategy and reliance on meter.

V-Triggers do wildly different things. Some are single use, such as Nash's Sonic Move which causes him to teleport near the opponent or Ed's Psycho Cannon which creates a large slow moving projectile. Some are multi-use such as Urien's Aegis Reflector which summons a mirror on screen immediately and can be summoned one more time. Some add new specials moves to the character such as Karin's Guren Ken strings or Ryu's Isshin parry. And some greatly modify a character while they are in it such as Birdie's Enjoy Time which increases his walk speed and changes the properties on all his specials and Kolin's Absolute Zero which gives her a new dash and extends the range on all her normals among other things. Necali's in particular is unique as once it's activated he is permanently in his V-Trigger 2 state, modifying many of his specials, normals, dash speed, and CA in addition to giving him a new special.

These are often game changing adjustments to characters, and can lead a certain defeat into a narrow victory. Learning what yours and your opponent's does is incredibly important. In general 3 bar V-Triggers are more powerful but harder to get until near death, while 2 bar are slightly less powerful or have as many uses but it can be possible to get 2 in a single round.

One special note is if the V-Trigger is not just a single move and instead is a powered up state where the V-Gauge will tick down, you will not be able to perform V-Reversals or V-Shifts / Breaks.

V-Skills are performed by pressing MP+MK together. These are usually unique special moves that vary by every character and do many different things; Ryu's is a 3f parry, Nash's absorbs a single hit non-EX projectile or can be used as an attack, Alex makes his next attack a counter hit, Birdie throws a variety of items on the stage, Dhalsim causes him to float in the air, and so on. By successfully landing a V-Skill, a character will build up their V-Gauge. Most only build V-Gauge one successful activate, however a few like Cody's build a tiny amount when used and more when they successfully land.

V Reversals are most similar to an Alpha Counter. By pressing f+PPP/KKK (depending on the character) during blockstun, the character will perform a defensive action used to get out of the situation. When a V-Reversal is performed, the screen slows down slightly and a spark appears above the character, followed by the character performing their move. The two most common are a single hit strike attack which knocks the opponent away causing a small amount of grey life, or an evasive roll to roll past the opponent. These moves take 1 bar of V-Gauge to perform.

Some characters have unique ones, such as Cammy's which attacks and side switches though is punishable on block, Vega's where he does a backflip instead of side switching, and Falke's which does 2 hits instead of only one. V-Reversals are invincible to regular attacks during them and can be canceled immediately into blocking, however they are not throw invincible. The startup on many of them are also quite longer, meaning if they are used against moves with quick recovery such as Ryu's MP the opponent can recover in time blocking the V-Reversal if it is a strike or punish if it was an escape type. V-Reversals can also be activated anytime during blockstun, meaning it's possible to cancel too late allowing the opponent to block what should be reversed or interrupt their next attack when they should've blocked it.

V-Reversals reduce your stun gauge so they can be used to condition an opponent into a desperate reversal only to be punished. V-Reversals are also necessary to avoid chip damage scenarios in past versions of SFV. Last note is that damage dealt with this reversal causes grey life damage. Characters with 3 bar V-Triggers benefit from having the potential to inflict more potential damage as a result.

Perform by pressing MK+HP. V-Shift is a defensive mechanic that consumes one stock of V-Gauge to parry an attack and distance yourself from the opponent. By pressing MK+HP again (or continue to hold the input) during the action after a successful parry, you can perform a counterattack known as a V-Shift Break. A V-Shift can be performed at any time as long as the character is on the ground and able to move freely. This is one way in which the mechanics differs greatly from V-Reversals. Additionally, V-Reversals always restore some stun upon activation, whether on hit or block. However, V-Shifts do not guarantee a set effect. Whether or not the parry is successful and the effect is triggered depends on the opponent's move the timing of the V-Shift, etc., meaning player judgment is needed to maximize its utility. Though it's a somewhat difficult system to master, it provides players with a defensive option against attacks/combos that are hard to counter. A successful V-Shift is immune to hits, projectiles and throws. A slow motion effect allows you to keep half of your V-gauge and the V-Break causes grey life damage like the V-Reversal. It is possible to V-Shift multiple times to avoid chip damage from Critical Arts.

A "successful parry" V-Shift is when a slow motion effect occurs. Immediately restores 50% of the V-Gauge stock used to perform the V-Shift and allows use of V-Shift Break although any other action can be performed.