The goal of Street Fighter is to defeat your opponent, and the way to do that is to drain their energy before they drain yours. Each character's energy is represented in the green bar at the top of the screen, known as the Life Meter. It starts out purely green when the character has full health, but when hit, the Life Meter gradients to a shade of yellow towards the center of the screen. Each hit drains your Life Meter from outside towards the yellow portion of the Life Meter. Once the meter is fully drained, that character is K.O.ed, defeated for that round. Life bars shown below in the red box. 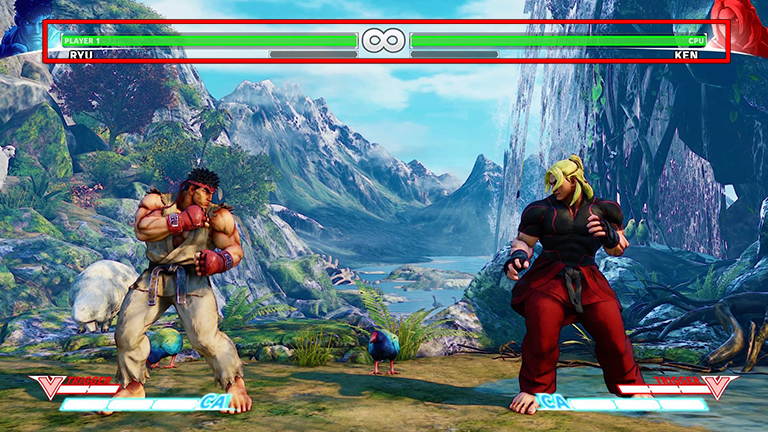 The main thing to note is that every character has a set amount of "Hit Points" and it's varies from character to character. Even though the Life Meter always has the same length on screen, the amount of Hit Points represented by the bar is actually different depending on the character. So while it's easy to say things like "Cammy takes more damage than Zangief", it's worth noting that this isn't actually true: every character takes the same amount of damage. The only difference is how many Hit Points they have total, and those with lesser amount of Hit Points just visually look like they take more damage. Dealing 500 points of damage to Ryu means he's lost 50% of his life. Draining 500 points from Cammy means she's lost 56% of her life. So even though it's the same amount of total damage, it will look like more life lost on Cammy's Life Meter.

The whited-out portion of the bar indicates grey life.

Grey Life (often called White Life as well) is potential damage. After a short amount of time of not being attacked, grey life will begin to convert back into real life. If you are hit by any move all the accumulated grey life will disappear in addition to taking the normal damage from the move.

Grey Life can be caused in several ways:

Because of this offense that does not result in a full combo can still cause damage further into the round by building up the opponent's grey life, then getting a stray hit removing a chunk of the opponent's remaining life. Note that when a round ends due to a time out, grey life does not factor into remaining health. So if Ryu has 30% health and Ken has 25% health and 6% in grey life (31% total), Ryu will still win by time out.

You can see all these numbers easily in Training Mode, which presents to you the percentage of damage the move is doing if you turn on Attack Data. Keep hitting the Training Mode dummy with one move at a time (no combos) and you'll eventually see the "Damage Scaling" value change to 95%, then 90%, and finally 75%. These values are also rounded up, however, in case anyone is wondering why sometimes in Training Mode you'll see some odd percentages like "76%" instead of "75%".

Also, keep in mind that damage reduction doesn't kick in until the meter drops below those percentages. In other words, let's just look at Zangief's Super Combo, the Bolshoi Russian Suplex. The move does three hits of 50, 100 and 400 damage. Ryu has 1025 Hit Points. It's only once he drops below 500 Hit Points that he'll start taking only 95%. So if Ryu is at 700 health, the first two hits of Zangief's Super will drain Ryu down to 550 health, still in the first segment. So the final hit will still do 400 damage. However, if Ryu is at 600, the first hit drains him to 550 so the second hit will still do 100 damage and drain Ryu to 450. However, since Ryu's life is now in the second segment, the last hit will be scaled by 95% and do 385 damage. Also, if Ryu is at exactly 512 health (50%), that will already kick in the 95% scaling.

Last but not least, this Life Meter damage reduction ignores any Grey Life. So if your Life Meter is at 49% but have a huge block of Grey Life that extends passed the 50% mark, you'll still take 95% damage.

The clock at the top of the screen, starting at 99 seconds per round. Whoever has the highest percentage of health left when it hits 0 wins. 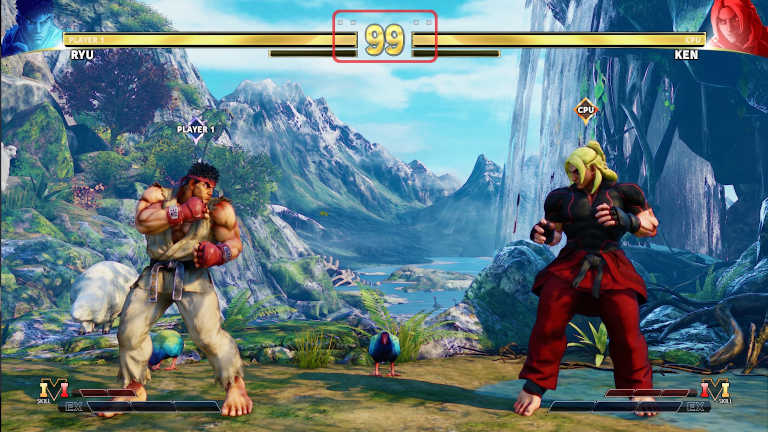 The concept of Stun, or "falling dizzy" as it is commonly referred to as, has existed since Street Fighter II: World Warrior. If your character is struck too many times in a row, your character will fall dizzy. As soon as this occurs, even in the middle of a combo, your character will be knocked over and fall down onto the ground. While they are falling, stars, chicks, or grim reapers will appear and rotate around their head. When you get up, your character will be in Stun and you cannot perform ANY actions until the Stun ends. Your character is thus susceptible to anything the opponent chooses. To put it more bluntly, the instant you become Stunned, the enemy gets a free combo.

Once your character falls dizzy, he/she won't stay dizzy forever. After a certain amount of time your character will recover and return back to a normal condition, but it takes a while. While you are dizzy, however, you can try to "shake" out of dizzy faster by shaking your controller and mashing on the buttons as fast as you can. Doing this will make your character recover quicker than normal, but be careful not to go overboard with the shaking: if your character does shake out and you are still wiggling the joystick, you may eat the combo your opponent is going for anyhow and end up taking more damage than if they had hit you while you were still dizzy (since the combo Damage Scaling resets). So shake as much as possible, but right before your enemy strikes you, just start to block. If you shook out, you'll Block their attack and be safe. If you didn't shake out, wiggling the controller right before the enemy hits you wouldn't have made a difference anyhow. It should also be noted that unlike previous Street Fighter games, the different objects that appear around your character's head as they fall to the ground do not make an impact on how long you are stunned for or an impact on how hard it is to shake out. Be it reapers, chicks, or stars, they are just a cosmetic effect at the end of the day.

Stun Meters shown below in the red box. 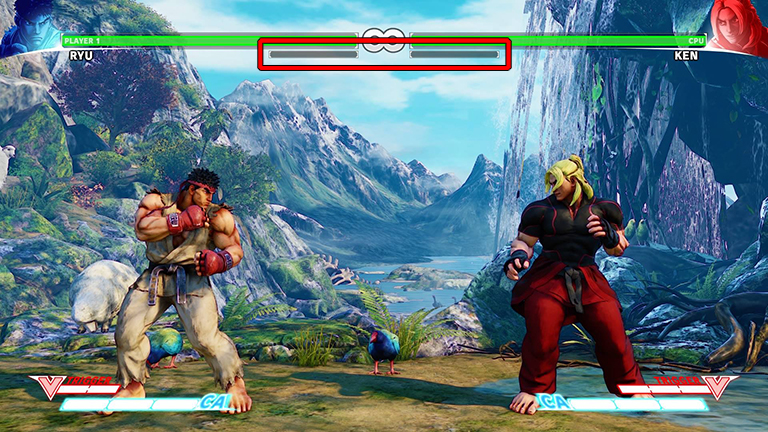 Critical Art Meters shown below in the red boxes. 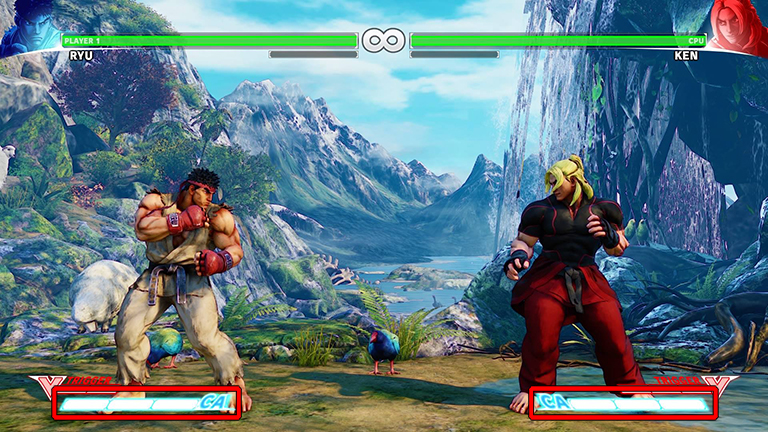 The Critical Art Meter is divided into three equal blocks. As you perform actions, the meter starts filling up with a blue bar. As soon as one block fills up, it begins glowing a brighter blue, which mean the block is ready for use. If at least one block is full, the meter reads "EX" on the inside edge of the meter, letting you know you can perform an EX Special Move. Once it fills up completely, the "EX" changes to a large, brightly glowing "CA", letting you know you can perform your Critical Art now. These two actions cost meter to use, and whenever you perform one, they will drain the amount of meter needed to use them and you have to begin filling up those blocks again.

Building Up the Critical Art Meter

Below are a list of actions that actually build Critical Art Meter, and the amount they build up:

(*) - For Throws, there only seems to be two base values that Throws give you for landing them: 80 or 100. It's not consistent between characters. For example, Ryu's Forward Throw is 80 but Back Throw is 100. F.A.N.G.'s Forward Throw is 100, but Back Throw is 80. Both of Zangief's Throws are 80. Getting thrown will always net you 60% of that value. So if the Throw builds 100 meter for the thrower, the person thrown gains 60 meter. If the thrower gains 80, the person thrown gains 48.

(**) - When you perform a Special Move, you actually gain meter for performing the move, regardless if it hits or not. The amount gained is completely arbitrary for each move. For example, Ryu's Hurricane Kick gains more meter than his Dragon Punch when you perform it. And Fireballs barely give you any meter. And in some cases, like Zangief's Lariat, he gains no meter at all, whatsoever for doing the move! So if it whiffs, you don't get any Critical Art Meter at all!

(***) - For Special Moves and V-Skills, the amount of Critical Art Meter, each move is assigned an arbitrary base amount that it builds up when you connect with the move. From there, all other values are calculated off of the base value (see chart above). Performing Critical Arts obviously only consume meter, but getting hit by a Critical Art seems to always net the character getting hit 100 points. Blocking a Critical Art, however, gives you nothing.

There are really only two ways to use Critical Art meter in Street Fighter V:

The V-System is based around the V-Gauge. The number of blocks it is varies based on the V-Trigger selected. It's usually 2 or 3 blocks, Dan is the only character with 1 block when using V-Trigger 1. Like the critical gauge, each block requires 300 "points" to fill. You can spend parts of it or the entire gauge to activate special character specific skills, refer to the V-System page for details.