After blocking an attack you will go into blockstun. Blockstun is a special state where you are unable to do anything for several frames until you recover. This means even if you mash LP afterwards, it will not come out until your character exits blockstun. 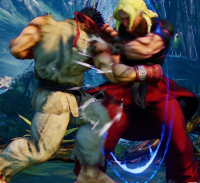 Block animation is signified by the blue spark

When a move is performed, even if it does not hit the opponent it will cause the opponent to go into a block state if they are within a certain distance. This is called "proximity guard". Since the opponent goes into a block state this means holding back makes them block, and they cannot walk backwards. Proximity guard is the reason you cannot simply walk away when Abigail is charging his HP in V-Trigger 1 or Sagat with his V-Trigger 2; you are still able to jump and back dash and do anything else besides walk backwards however. 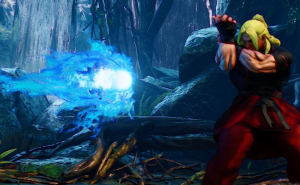 Notice Ken is in his block animation even though the Hadoken has not hit.

After you are knocked to the ground, in most cases there are 3 ways you can get back up. Quick, Back, or Delay Rise. Each of these have different timings for getting up, which can help avoid different setups from the opponent. Note that not all options are available after every move. After a crush counter sweep, the only option is delay rise. After a throw or wall bounce, you cannot back rise. Certain moves such as many critical arts force the opponent to quick rise. Other moves may have other restrictions, off of most options however you will be able to choose which you want to do. 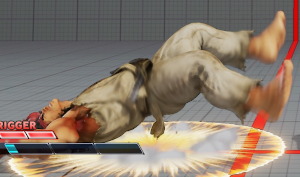 As of the current version, all character's wake up timings are universally the same.

Quick Rise is the fastest way to get off the ground. Performed by pressing 2 punch buttons or pressing Down after hitting the ground, the player will quickly get back on their feet.

Back Rise is more of a defensive option, and the more common one seen. Performed by 2 kick buttons or Back as you hit the ground, the character will slide backwards before getting on their feet. Back Rise is always 5f slower than Quick Rise. In addition to being slower, back rise causes you to move away from the opponent creating distance, however moving yourself closer to the corner. Because of the speed difference, it can be useful even in the corner to throw off the opponent's setups.

Despite the different animations, all back rises move the character the same set distance.

Delay Rise is done by not inputted anything, and is the slowest option. In many instances this allows the opponent to activate moves such as Alex's V-Skill Overhaul or Ibuki to stock up on Kunai. The advantage however is it messes with the opponent's timing, making it much more difficult to time meaties or setups than a quick or back rise.

After you recover from any option, including air resets, you are throw invincible for 2 frames. Regular throws have 3 active frames so will still connect on a throw perfect setup, however command grabs may whiff

Throw invincibility means the character cannot be thrown during the move. These moves include Ryu's LP Shoryuken, Zangief's EX Spinning Pile Driver, and any airborne attack such as Urien's headbutt.

Projectile invincibility means the character can go through any projectile, and are useful against characters such as Guile and Sagat. If the invincibility runs out while over the projectile however they will still take damage; this means against slower moving projectiles it is still not possible to get through them reliability. These types of moves include Ryu's Tatsu, Alex's EX Stomp, and Karin's Ressenha.

Upper body typically means the move is invincible to airborne attacks. These types of moves are excellent for anti-airs. These moves include Ryu's MP Shoryuken, Laura's HP Bolt Charge, and Juri's MP Tensenrin

These moves are fully invincible to all types of attacks. These include most CAs, Ryu and Ken's HP (starting on frame 3) and EX Shoryuken (starting on frame 1), Necali's HP and EX Raging Light, and Sagat's MP and EX Tiger Uppercut.

Certain moves in Street Fighter V have a property called Armor. Armor allows the character to absorb an attack, without being interrupted. Common examples of this are Laura's EX Bolt Charge, Urien's specials after activating his V-Skill, and Abigail's HP while in V-Trigger 1. When absorbing an attack the damage it would normally inflict is instead converted into grey life. Armored moves are typically EX Specials or V-Trigger bonus, however certain normals such as Zangief's charged HP have it as well.

Most armored moves can only absorb 1 hit of any type of attack, meaning many EX Projectiles such as Ryu's EX Hadoken will still beat them. However some can absorb multiple hits of armor. Abigail's EX Nitro Charge can absorb 2 hits while in V-Trigger, and his Metro Crash in V-Trigger 2 can absorb up to 99 hits when at maxed charged making it nearly impossible to break through.

Armor breaking moves are much rarer in Street Fighter V than IV. Any CA will break armor, and a couple of character specific moves such as Ed's and Seth's V-Skill 1 will break armor.

Moves that are armored have a special red hit effect when they absorb an attack.

Every character has the ability to go from a "non-hittable" state instantly into a Special Move, EX Special Move, or Critical Art with nothing happening in between. This includes from blocking and during wake-up. Whenever you successfully perform a Reversal, the message "Reversal" will appear on the side of the screen.

Similar to the links in combos, reversals allow a 5f window (as you exit blockstun or 4f before) for inputting the special move and still have it come out as fast as possible in reversal timing.

While Reversals technically mean what is stated above, in Street Fighter V reversals usually refer to fully invincible moves, such as Ryu's HP/EX Shoryuken, Urien's EX Headbutt, Falke's EX Psycho Schnieder, and so on. These are commonly called DPs (the original, Ryu's Shoryuken, roughly translated to "Rising Dragon Punch" and the name stuck), and are the most common reason to reversal. These moves usually have long recovery making them high risk moves, as whiffing or being blocked while using one will lead to taking big damage. A special note on them is during their recovery, opponents are in a counter hit state allowing larger combos or crush counter punishes.