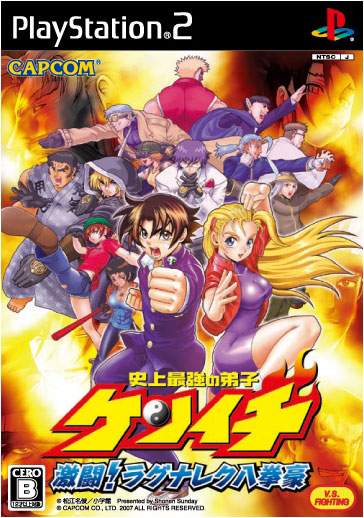 Shijou Saikyo no Teishi: Kenichi is Capcom's latest published title and 8ting's latest game for the PS2 based on a popular manga and anime from Japan. Focusing on martial arts students, Kenichi takes a lot from 8ting's last series (Naruto Gekitou! Ninja Taisen) and various other 3D titles to offer a refreshing, if somewhat cliché'd take on 3D fighters. 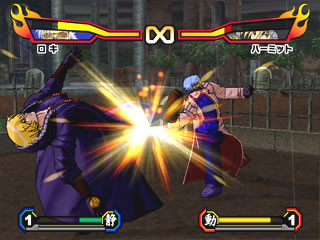 Kenichi uses a simpler system than most fighting games, with very few buttons to use and no jumping or ducking to be seen outside of attack strings.

Kenichi has various modes for each of the characters named Fury (Red) and Calm (Blue). Both modes give the players different tools to work with and varying moves in their character's movelist.

Fury gives your character the ability to Super Cancel any special move in his arsenal at any point during its animation once it is activated and to cancel any normal or special attacks by Activating once they hit, retaining juggle or hit state. Activating also gives a slight boost to the damage rating of attacks.

Calm gives you the ability to guard cancel during blockstun once activated (always with QCF+A), to cancel your own hitstun state by activating (akin to bursting in Guilty Gear) and can be used in place of any special attack during a standard combo. This mode also gives a slight increase in defense once active.

Teching in Kenichi is done by pressing any direction + any button once you hit the ground. While techrolling, you are completely invulnerable to attacks until you are fully up and able to move or guard again, which makes Techrolls a thing that should be used as much as possible. Teching is not almighty however, and can be dealt with by any of the three options avaible to you at any time (grabbing, guard breaks or attacking).

Guard breaks are automatic in this game and performed by pressing C (Cross on the default setting). Guard breaks cannot be countered through, so they must be sidestepped. They also have very long hitstun properties and put your opponent in a permanent juggle state, whichever hit hits them next will always send them flying up.

This game has three types of counter hits: standard counter hits (done by attacking your opponent while he is in an attacking state as well), Counter (pressing D at the same time your enemy attacks (Circle on the default setting)) and Just Counter (same as Counter but done as close to impact as possible). Counter and Just Counter yield two things: they deal damage and turn your opponent around. Since guarding in this game cannot be done backwards and turning around is not considered a Neutral state, this is a very good thing. Just Counters simply deal a bit more damage and put your opponent closer to you once they are turned around. Just like in Third Strike, Counters are a vital part of any character's gameplan.

Countering out of guard

Grabbing in Kenichi is done by simply pressing F+B or Back+B.

Every character in Kenichi has the same motion for their specials and supers (two QCF moves, two QCB moves, and R1 or QCFQCF+B to do a super). This was mainly done because the game was meant to be played on gamepads, making it easier for the players to pull off complicated combos.

When in Fury mode, you can cancel any attack or special by pressing E. This retains aerial juggle state if there is any and/or hitstun for your opponent. There are various uses to this, baiting Counters, using Guard Breaks mid-string, grabbing your opponent with F+B and creating longer, untechable combos.

Calm mode can also use this to its advantage but can only cancel at any time a super or special could also be used (the second-to-last hit of any character's built-in combos). However, it can also be used while you are in hitstun yourself. This can prove useful to Guard Cancel through the incoming string or Counter the incoming hit.

Kara throwing in this game is simple: just do a fast step forward (tap F lightly) and then press F+B the very second you begin to move. In some characters' cases (Thor, Freiya, Ukita), this adds almost a full character pace to their grabbing range. Doing the grab too late with some characters will not yield a grab but only a standard attack, but the timing is fairly lenient.

Built-in combos in Kenichi can be delayed up to a 59 frames value. Since Counters are actually active for only around 30 frames, this can be used to bait a Counter and punish it mid-combo. It can also be used during combos in order to prevent your opponent from juggling out of your hands or hitting the ground and techrolling away safely.

This list is still very tentative, as the game is still fairly new, but I feel it is fairly accurate.