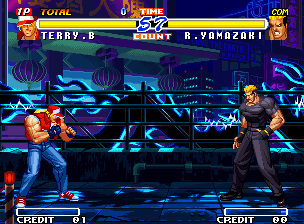 It's a good idea before you begin, you view the How to Play so you know the basic controls for the game. This is the first step to learning how to play, so pay good attention!

Forward Dash : Double tap forward. If you jump during a Forward Dash, you can jump further than you could normally.

Backward Dash : Double tap back. If you time this correctly, you can avoid projectiles and some attacks.

Small Jump : Simply tap the up direction and you will do a small jump. You can do a small backward and forward jump as well.

Blocking : Simply hold back while your opponent attacks, and you will defend yourself, taking no damage from basic attacks, and small amounts of damage from special and desperation moves. You can block aerial and high attacks from a standing block position. Also note that if you are blocking your opponent, you don't have to hold back to continue blocking, this makes countering with a Breakshot easier, along with switching to a low blocking position.

Low Blocking: - Hold back and down together as your opponent attacks, and you will assume a crouching guard position. This is the only way to defend against low attacks. Aerial and most high attacks will hit you in this position.

Roll Recovery (Front Plane) D after getting knocked down

Roll Recovery (Back Plane) D after getting knocked down

Taunt: S From Far Away

Reversal: Guard then input a special move immediately after blockstun has finished

Line Shift Fighting While in the back line, you have quite a few maneuvers you can perform, offensive and defensive. It's a good idea to learn to take advantage of both, because it can make a great deal of difference during play.

Attacking (Front line): - You can attack an opponent that is in the back line by hitting D for a high attack and Down + D for a low attack.

Line Thrust Attack: - Nearly every character can perform an attack that will force their opponent into the back line, allowing them to attack them again with a front line attack.

Line Shift Attack: - Some characters may have a move that enables them to hit an opponent while in the front line as they shift into the backline. These kind of moves can make for great offensive and defensive maneuvers, but as with any line shift movement, use wisely.

Every character can chain certain basic attacks into a chain combo. These chain combo's differ from each character, but they essentially do pretty decent damage on their own. The true power behind these rely on being able to follow up these chain combo's with a special or desperation move that greatly increase their damage potential. You can also knock your opponent into the background with some of these combo's, allowing you to do even more damage. Experiment and learn your characters chain combo's, then figure out how you can turn them into even more flashy combo's.

The damage from either side will carry over the next rounds until the match is over.

Every character has at least one Desperation and one Super Desperation Move, and both are very powerful types of attacks.

Super Desperation Moves can only be performed when your life bar is flashing red and you have the power gauge built up to P.Power. If your gauge is at S.Power and your life bar begins to flash, it will automatically change to P.Power.