Credits to Sleepmode for allowing us to transcribe their Project Justice blog posts to populate this page.

to move forward or

to do a brief sprint. Holding the second

to do a back dash.

Forward dashes can be interrupted with any action.

Backdashes don't have any invulnerability, but you can block during the animation.

gives you a jump.

If you forward jump during a dash, your jump will travel further horizontally.

gives you a higher than normal jump.

Landing after being airborne has a brief landing animation, regardless of the previous airborne action.

You have 4 Attack buttons:

You can execute Normal Moves with any

or crouching, while holding or simultaneously pressing

Most characters have an Attack sequence, when pressing:

Depending on the character's move set, there are certain attacks that can be performed while standing / crouching, or while airborne

, while pressing or already holding a specific direction.

while already airborne, are also possible.)

These Normals tend to have special properties, which will be noted on a character's page and their move list.

Known as Nekketsu Combos (Hot-Blooded Combos) in the Japanese version,

similar to Chain Combos / Magic Series in other games,

you can build a combo by doing attacks in order of increasing strength.

Every character has a different series of inputs, but the base format is:

Combos can include both Standing Normals and Crouching Normals in them, be preformed while airborne,

and can be continued even if a prior attack in the combo whiffs.

The timing for performing these combos is VERY lenient compared to other fighters, even during the recovery of a move on hit/block.

During Air Combos, you can also press/hold

to adjust your horizontal distance, for higher combo potential.

Rival Launchers are Command Normals that launch the opponent very high into the air, similar to the Marvel vs Capcom games.

to cancel the attack into a High Jump for an extended air combo, commonly known as an Aerial Rave.

Rival Launchers can only be used by themselves; you cannot chain into them as part of a Textbook Combo.

However, they have high hitstun that allows for more elaborate air combos,

depending on what point you attack after the High Jump, and how long you delay certain Normals while airborne.

Attacks with this special property cause a lower air launch than Rival Launchers, and lead to shorter air combos.

However, a mini launcher can be worked into a textbook combo, such as

during a dash does an Overhead shoulder tackle.

during a dash causes a low sliding kick, while

Similar to Street Fighter and most 2-D fighters, many character-specfic techniques are performed via directional motions, such as

However, in Project Justice, you do NOT have to press the Attack button at the same you press the final directional input. For example, pressing:

, will all execute the same Special Move.

Similar to Textbook Combos, there is a high degree of input leniency.

You can cancel many combos into a Special Move, usually after performing a Heavy Normal or Command Heavy Normal.

More commonly known as Super Moves, these resource-dependent techniques are usually performed with 2 duplicate inputs of

They share the same properties as Special Moves, often do more damage than them, and are used by spending 1 stock of Guts Meter.

The Guts Meter is your standard super meter, which builds as you use normal and special attacks, and can stock up to 5 bars.

Meter is gained on hit, on block, and on whiff. Heavy Attacks tend to build more meter than Light Attacks.

will allow you to block high and mid attacks.

will allow you to block low attacks.

Some Commands Normals have the Overhead property (ignores your low block, must be blocked standing up), but there's no Guard Crush system to prevent prolonged blocking / turtling.

Specials and Supers chip away at your Vitality Gauge, but you can't die from chip damage, even with only 1 point of health remaining.

While in the air, pressing

will allow you to block in the air.

Because you can block right after jumping, holding

will allow you to low air block.

However, landing has 1 frame of recovery, where you are vulnerable to lows.

In certain situations, such as if your opponent jumps over you, or after performing certain moves, you'll end up facing away from your opponent.

You can't block, but you can press a direction

It takes 1 frame to block after turning around.

or jump/crouch to do your forward facing Normals.

Known as a Guts Counter in the JPN version, Tardy Counters are Project Justice's version of Guard Cancel moves.

To perform a TC, do a Heavy Command Normal, Special Move, or Super Move after blocking an Attack.

The timing is very lenient, as you can input a TC during any point of blockstun.

Rival Launchers are a common use for a Tardy Counter option, which balances out their lack of combo potential.

Meter is not required to do this, but if you get hit during it, you will take about 1.25x more damage from the Attack.

TCs also add about 4 extra frames of startup to whatever move you used (2F from TC's animation, then 2F before the Attack).

during a dash gives you a roll.

This will move around your opponent, and it gives you a low profile, so it can potentially avoid some long-range Attack options.

will sidestep away from the screen.

to sidestep towards the screen.

Opponents will automatically turn to face you whenever you sidestep, so it is impossible to go "off-axis" in this game.

If you side step just as an attack would make contact, you'll quickly step to their back.

The opponent will not automatically orient towards you in this case.

This will avoid linear attacks (like jabs), but there's attacks with wider lateral hitboxes that can still hit you.

When knocked down and still lying on the ground, the direction you press/hold changes how you recover.

(or 2 Attack buttons) = Quick Recovery / Get Up, in place

Note: There were Get Up Attacks in Rival Schools, but not in Project Justice

When knocked into the air by an Attack, or hit while airborne, you'll be stunned into the Blowback state.

Similar to a normal/soft knockdown state from other fighters, you can recover from it once hitstun ends.

You can recover from Blowback into the standard Jumping state by pressing:

2 Attack buttons to Safe Fall / Air Tech, backflipping in place to an up-right position, or

If you Safe Fall at the proper height, you can then perform any of your character's airborne options.

If you perform a Safe Fall input near the ground, you will perform a ground tech, recovering backwards into Standing position.

To recover from Blowback as soon as possible,

you can repeatedly press an Attack button(s) while you're still stunned by the previous hit.

You'll be more likely to recover on the first possible frame.

If you don't do any proper Safe Fall inputs, you'll remain in a free-fall state, left vulnerable to any hit-based Attack,

even consecutive Rival Launchers and combos, until fully touching / falling to the ground.

After ground fall, you take 1-3 points of damage. You can then perform any On The Ground recovery option.

Attacks that cause a Slam/Slamming state spike you out of the air, and while standing, bounce you against the ground.

You can recover immediately after either, using Safe Fall options.

Attacks that cause a Down state, similar to a hard knockdown state, cannot be recovered from, until after ground fall.

When in a neutral state on the ground, pressing

close enough to your opponent will give you a normal throw.

Press the same input just as your opponent tries to throw you to escape / tech the throw.

If you manage to get behind the opponent, press

, while close enough, to do a back throw. Back throws are not techable.

When the opponent is crouching, press/hold

to do a low throw.

Low throws are also not techable, which means they form the crux of your standard high/low game.

When you and your opponent are in the air, pressing

will do an air throw. Air throws can be teched.

Unlike other throws, Air Throws don't have a whiffing animation. You just perform a

You DON'T need to hold forward or backwards in order to do ANY throw. It's only distance/height dependent.

When the opponent throws you, pressing

will perform a throw tech. Only normal and air throws are techable.

within 6 frames of the opponent's throw connecting (8 frames for air throw), you will tech successfully.

When the hitbox of your attack overlaps that of your opponent, a clash occurs.

A lightning effect goes across the screen, and both players gain one bar of meter.

A time-stop effect also occurs, but that has no effect on the recovery of either player.

To Taunt, in the arcade port, press Start while standing, in a neutral /

In the console version, you have to change a button's configuration to be Taunt.

Each character has a different Taunt, and longer taunts build more Meter. 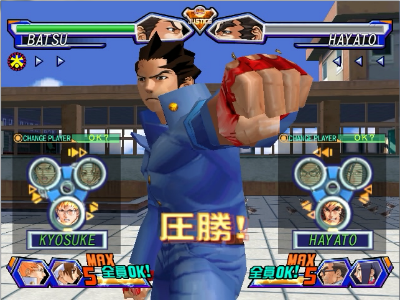 Teams in Project Justice work similarly to teams in KOF, but with a few scruples to the system that make the whole dynamic much more unique.

At the end of a round in Project Justice, both players are presented with a selection box—this allows you to select which character you'll be playing in the next round. You can make this selection regardless of who won or lost the last round. Further, characters are not eliminated when they're defeated, so you can elect to take the character you just lost with into the next round if you want.

Because of the general laxness of the way teams operate in Project Justice, there is, in turn, a lot of freedom in how a player can choose to build their team. While many players may pick certain characters just for the utility of their Team-Up Techniques, it is also viable to just pick a team consisting of characters that you like.

To do a Team-Up Technique (aka 2-Platon), press

to call in Partner A, or

for Partner B. You will perform a super that costs two bars of meter. If the move connects, your partner will come into the battle and perform a unique move. Depending on the character, this move will deal damage to the opponent, heal your point character, or restore the Guts Meter. Some Team-Up Attacks also just build Meter for you as they hit.

Team-Up Techniques also have a very generous combination of both invulnerability and super armor on startup,

giving them high use as reversals or to call out an aggressive opponent.

However, you can be Thrown before they activate.

You will enter into a small mini-game where one of your partners and their remaining partner will engage in a sudden-death fight with a five-second time limit.

If you hit them, you win the challenge, the remaining damage of the Team-Up Attack will be negated, and the fight will be reset to neutral, similar to a successful Throw Tech.

However, if they evade you for those 5 seconds or hit you, you lose, in which you waste the meter spent on the counter, and you will receive the full damage of the Team-Up Attack.

The final way to spend meter in this game comes in the form of Party-Up Attacks (aka 3-Platon).

By pressing any three Attack buttons, you will spend all 5 bars of your meter to execute an attack similar to a Team-Up Attack, but uses all of the characters in your team.

Party-Up Attacks have the same startup invulnerability and super armor as Team-Up Attacks, but you can still be Thrown before they activate.