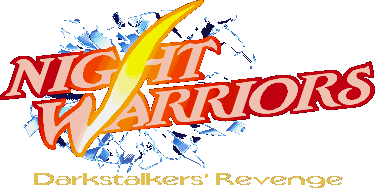 Night Warriors - Darkstalkers' Revenge (a.k.a. Vampire Hunter in Japan) is the second installment of the Darkstalkers series.
Released in 1995 for the arcade and later gaining a home release on the Sega Saturn in 1996. Other editions include the Japanese only release of Vampire: Darkstalkers Collection for the PS2 and the digital release of Darkstalkers: Resurrection for XBL and PSN (disc copy available only on PS3 in Japan).

On June 24th, 2022, Night Warriors was rereleased as apart of the Capcom Fighting Collection (alongside Vampire, Vampire Savior, Vampire Hunter 2 and Vampire Savior 2) with rollback netcode on PlayStation 4, Xbox One, Nintendo Switch and Steam.

For those unfamiliar with the original Darkstalkers title, Night Warriors changed alot. The original Darkstalkers had a s super system more akin to early KOF games or the S-Groove from the CVS2. Once the super gauge was full it would start to deplete and you had a limited time to execute a ES or EX move. In addition, while your super gauge was depleting inputting a special move would result in a ES move. You could not stock levels of super gauge and your gauge would reset at the beginning of each round.

In Night Warriors, they decided to return to a traditional super bar system, akin to Street Fighter, which could also be stacked with an infinite amount of bars.

Chain combos also worked differently in that you could not alternate between positions and punches and kicks. It was very straight forward (Ex. Standing LP, MP, HP) and you could cancel chain combos into specials, providing the normal your cancelling is cancellable on its own.

In Night Warriors, you can alternate between strengths but cannot cancel into specials or EX's (unless it's a motion command super) during a chain. This gave characters more damage possibilities.

The overall game speed was slower, there were no pursuit attacks and the presentation including character artwork, music and backgrounds were different.

Night Warriors is a more refined title compared to it's predecessor overall. While smaller, there is a dedicated player base for Night Warriors and slowly growing. 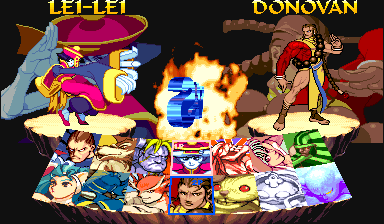 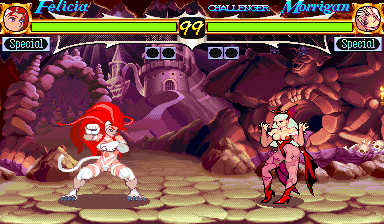