Most special move commands consist of one or more of the following motions combined with an appropriately timed button input, typically following the completion of the motion.

So in this example, Cammy jumps in with Hard Punch, does crouching Light Punch on landing, links that to back Medium Punch, which chains into Hard Kick target combo, which she cancels into Hard Kick Cannon Spike, then super cancels into Critical Art (SFV's Super Combo). 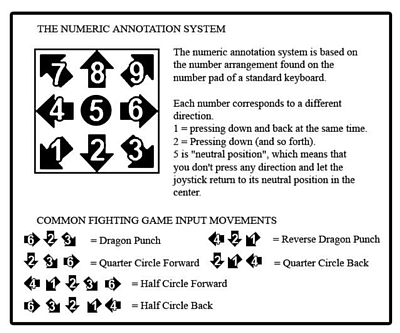 Often a numbering system is used to discuss joystick positions. Below is a guide explaining how this notation works.

Note: These numbers can be easily referenced by looking at your keyboard "numpad". Think of it as a joystick/controller that is facing to the right. "5" is used to signify "neutral".

These prefixes refer to the position, or "state" you should be in when executing the respective attack.

Not everyone plays on the American version, and some character names are different in the Japanese version, so to avoid confusion, we should not use the names Vega, Bison, or Balrog.