Brawlhalla has mechanics that aren't really properly explained in the game but expect you to know how they work for things like Battle Pass challenges, these will explained here. 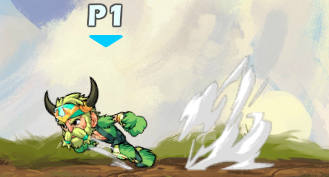 Dashing is an essential mechanic for Brawlhalla's movement. Instead of directional dodges on the ground, you instead get access to a directional dash, that you can use to go forward or backwards by pressing either forward or down and dodge for a forward dash or back and dodge for a backwards dash. However it is important to not spam the same directional dodge consecutively because you gain less distance with each dash. You can also use the dash to gain momentum for attacks or jumps for a better jump arc. Dashing is very important for characters with very low speed stats like Queen Nai to make up for their slow movement. 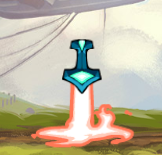 At the start of a 1v1 match, The first weapon spawn is always at the middle of the map. The time you get a weapon is completely random on which one you'll get, however the next time you get a weapon, it will alternate between the other weapon that you had before. You can use this to your advantage by grabbing a weapon spawn and throwing it and picking up the weapon you had before to maintain the same weapon on pickup. Weapons spawn frequently when no one has one, and less frequently when all players have one.

At the start of a 2v2 match, instead of the weapon spawn being at the middle of stage, there will be two spawns at each corner of the stage.

Weapon Stalling is a strategy that require you to constantly weapon throw the weapons you have. Doing this resets the invisible timer that weapon spawners have forcing the opponent to use Unarmed. It is best to do this strat once you have taken a stock since you get the chance to not only choose the weapon you want to start the stock off with but also having the abilty to start the opponent with a disadvantage on their stock. 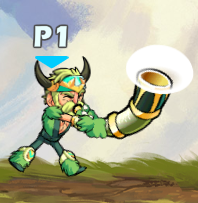 If you play with items, then you will see this item that looks like a horn. This is the Sidekick Summoner, and instead of waiting for the weapon spawn timer, you can instead call your sidekick to place a weapon spawn where at the location it was called. The sidekick also has a hitbox that will hit any other player that is the path of the sidekick. 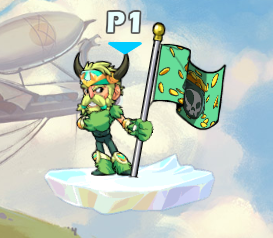 Gravity Canceling is a mechanic that allows you to do grounded attacks in the air. For instance signatures, grounded light attacks, or if you want to be cheeky, taunts. When a gravity cancel is preformed it creates an ice slab for you to stand on while you do the move.

This tech is used to extend combos or confirm kills with moves that have a lot of force. Spear users commonly use Gravity Cancel Down Light for extra damage and force. Gravity Canceling will be expanded upon further on certain characters and weapons.

Chase Dodging is a mechanic that allows you to apply pressure on your opponent. You can initiate chase dodging by landing an attack and either dodging forward, downwards or upwards. While good as an offensive tool it also really useful for recovering back to stage as if you land a hit off stage then you will reset the dodge timer allowing for a chase dodge that can possibly bring you back to stage. 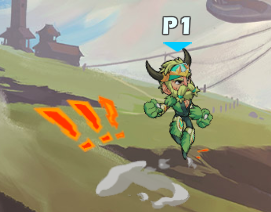