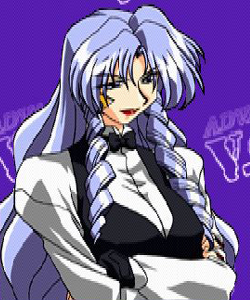 Reimi is one of the most explosive characters in AVG2, with her strong footsies and space control belying her ability to kill most characters in the game with a single combo, so long as she has the meter to spare. She's definitely no slouch in neutral, with fantastic reach on her pokes, a powerful fireball in Burning Rose, and excellent aerial space control thanks to her j.LK, all complimenting her ability to actually just kill the opponent if she puts them in the corner. That being said, landing one of Reimi's devastating corner combos requires a solid opening, and due to a lack of strong mixup tools (her only method of breaking down defenses largely being a throw she can't combo after), she relies much more on exploiting unforced errors to get her gameplan going.

Command Moves
f+HK: A hopkick similar to Guile's sobat kick. Can be a decent poke, since it goes over low attacks, but it can be low-profiled, as well as punished if not spaced properly.
j.d+HP: A jumping elbow attack. Has a poor vertical hitbox and cannot cross up, but has the interesting property of being air-unblockable.

Unlike many other characters, Reimi doesn't have any one guard cancel that outshines all the others, so it's important to know which one to use in which situation.
LP is best for aerial opponents, LK is better on grounded opponents, and HP is a good catch-all guard cancel if you want an easy knockdown.

Burning Rose (qcf+P): A solid fireball that covers a good chunk of the screen. The LP version moves at a slow enough speed that you can follow it in, or cancel into it on block to establish stagger pressure. The EX version hits three times, significantly increasing its advantage on hit and block, thus making it a core part of Reimi's devastating corner combos.

Rose Stinger (charge b,f+K): A forward charging attack that forms the basis of Reimi's combos. The HK version totally invalidates the LK version in speed, distance and damage, but the fact that it leaves the opponent standing means it's unsafe even on hit if you don't super cancel it, so you only ever want to confirm into this move. The EX version hits more times than the HK version, but does less damage. However, due to its speed, it may be useful as a reversal in a pinch, especially since it knocks down.

Hurricane Rose (charge d,u+K): Reimi's version of a flash kick. Despite its animation, it actually has okay horizontal range, hitting right up to the tip of Reimi's foot. Its invincibility lasts until the first active frame as well, which makes it usable as a reversal, and even better as an anti-air. The EX version has much less reliable invincibility, but its high damage makes it useful in some juggle combos.

Griffon Nail (f,hcf+K): Reimi charges forward, taking the opponent high into the air on hit before slamming them back into the ground. Deals exceptionally high damage, even among other supers in the game. It has poor invincibility, but it has projectile invulnerability for 12F after startup, which can make it a useful anti-fireball tool. Its combo applications are limited, but still important -- while it can't be used in juggles, it's totally possible to confirm into this after EX Burning Rose. It's also air-unblockable, meaning you can guarantee it if the opponent air blocks a fireball.

Reimi's neutral game relies mostly on trying to limit the opponent's movement with LP Burning Rose and jumping normals. While she can use her grounded normals -- in particular, 5C, 5D and 2D -- they're a bit on the slow side, leaving her slightly more susceptible to counterpokes compared to other characters. However, meeting opponents in the air is a very comfortable situation for Reimi, since her j.LK has a fantastic angle for air-to-air coverage, which is especially useful when you're able to force the opponent to jump over Burning Rose. When the opponent begins to air block in preparation for a j.LK, start using j.d+HP to bust open their guard. j.HP and j.HK can also be used to meet the opponent in the air, depending on spacing and timing. If any of these hit, you can hit them with EX Hurricane Rose upon landing.
Reimi is thankfully no slouch on defense, either, thanks to Hurricane Rose's great invincibility window, making it useful as both a reversal and as a sky protector. That said, because it requires a charge, there may be situations where you'll need to use a guard cancel due to a lack of available charge.
Once you push the opponent to the corner, use your stagger options and space control to bait out errors from the opponent and punish with your devastating corner loops.