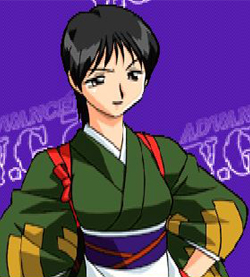 Kyoko doesn't even want to be here.

At a glance, you might think that Kyoko is a grappler character. However, while she does sport a command grab and a unique anti-air grab special, Kyoko is, surprisingly, far more well-suited to a close-range pressure game backed up by some dirty setplay. Sporting strong combos, one of the few four-hit aerial chains in the game, and powerful okizeme with EX Sazanka, Kyoko excels at overwhelming the opponent and not giving them a chance to breathe. However, this strength comes at the cost of a somewhat linear neutral game -- with her aerial normals being her primary way to start offense, she suffers against characters with good space control options. She also very heavily relies on meter to get going, so properly managing your resources is paramount to making Kyoko work.

Command Moves
b+HP: A short-range command elbow. Special cancels, but doesn't really do a whole lot for you.

Kyoko will usually get the most mileage out of her LP and LK guard cancels. LP works best for airborne opponents, LK is best for grounded opponents due to its horizontal range. In either case, your goal is to convert into Ominaeshi to score a combo.

Ominaeshi (qcf+P~P): A short-range elbow attack. The LP version stays in place, the HP version moves forward slightly. Has a follow-up called Otokoeshi, performed by pressing P again. The strength of Otokoeshi is determined by the version of Ominaeshi used, so you want to use HP Ominaeshi in combos. EX version has both hits come out automatically, deals strong damage and has some defensive utility due to it being an instant super at close range, so it's worth keeping a bar stocked for this if you need it.

SECRET Ominasehi (hcf+HP+HK)): Essentially HP Ominaeshi, but with a notable difference to Otokoeshi: in exchange for a smaller hitbox and incredibly reduced damage (only dealing 1pt), it builds significantly more meter than other versions of the move -- a quarter of a bar on whiff, and half a bar on hit! Unlike most other secret moves, this is extremely useful for Kyoko, since meter is so important to the rest of her gameplan. However, bear in mind that when in range, Jinchouge will take priority over this move.

Shakunage (rdp+P): A series of three catch counters. LP version catches jumping normals and overheads, HP and LP+HP versions both catch grounded mids. Shakunage cannot catch lows or projectiles. All versions launch for a juggle follow-up, but the LP+HP version side swaps. Good way to catch people out for being too predictable with their buttons in neutral.

Sazanka (dp+K): Leaping anti-air grab. Even though it's unblockable, the lack of invincibility makes this move difficult to use as an anti-air. Its use in combos is higly valuable, though, since it provides a hard knockdown, setting up Kyoko's incredibly scary okizeme. The EX version is particularly useful in this regard, since it deals more damage and is easily confirmable as a super cancel from Ominaeshi.

Jinchouge (close hcf+K): Kyoko's command grab. A nice option to have against people who are turtling up too much against your offense. In the corner, this can net you a combo with an OTG pickup, so it becomes doubly useful there. Bear in mind, though, that you need to be careful when executing this move from a dash -- if you have no meter you'll often get Sazanka, and if you have two bars you might accidentally let Hosenka rip. Best to try and tick into it.

Housenka (close f,hcf+K): 1F command grab super that's unjumpable after the flash. Because of the way the final group of hits work, the best damage will often come from landing this in the center of the screen (not the centre of the stage). However, you can combo after this in the corner by following up with Ominaeshi (it will whiff, but Otokoeshi will hit), which you can then extend with a super cancel if you feel like dumping meter.

Because Kyoko lacks good long-range options for neutral, your best bet is to try and build meter by whiffing your air chains if your opponent decides to back off. If you can successfully goad them into coming to you, you can intercept their approach by jumping toward them with your fantastic aerial buttons and try to establish offense. If you find yourself on the defensive, you have some solid guard cancel options and EX Ominaeshi, so don't forget to use those if you need some breathing room. Remember that Kyoko is very highly dependent on meter to really make the best of her tools, so make sure you stay on top of your resource management.

Kyoko's okizeme starts with landing EX Sazanka. From here, you want to dash jump into j.HK. This effectively sets up an ambiguous left-right mixup, with the side you end up on depending on the timing of your button press. Since the resulting combo you land from this generates a fair amount of meter, you can loop this okizeme setup for a pretty decent amount of time, cashing out a ton of damage in the process.