A heir to the ruling clan of the Demon World, Morrigan is a succubus wielding a wide variety of magical abilities. Her most iconic ability is her shapeshifting, mainly in transforming her bat wings into a variety of weapons. She is the main character of the Darkstalkers series, which had heavy influence on the Marvel Vs Capcom series, and has been a mainstay in Capcom's crossover fighting games.

In UMvC3, Morrigan is an oppressive zoning character. Utilizing her uniquely strong fly/unfly cancels, she can fire off both grounded and aerial fireballs with rapid speed, quickly filling the screen. This is further exaggerated by her Astral Vision (22XX) hyper, which creates a clone of Morrigan behind the opponent, using all the same attacks that she does. A well-executed Morrigan fireball pattern can lock down an opponent for a long time, while dealing huge chip damage that puts pressure on the opponent to act hastily.

Morrigan's dashes and airdashes work very differently from the standard ones found on other characters:

Her ground dashes, both forward and backward, place Morrigan into an airborne state. She will continue to rise higher into the air for the duration of the dash, ending up just underneath her regular jump height. As a result, Morrigan can not wavedash or plinkdash across the ground the way that most characters can. Instead, Morrigan can access her air normals and air specials relatively quickly, and relatively low to the ground. Morrigan can extend the duration of either dash by holding down the dash input, allowing her to glide fullscreen in a single dash. Her forward ground dash can be canceled from Frame 15 onwards. Her backdash can not be canceled, except with X-Factor. 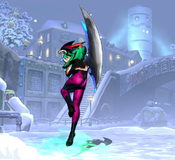 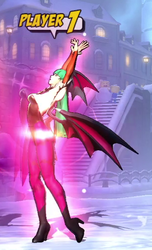 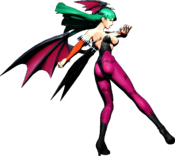 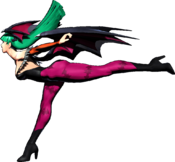 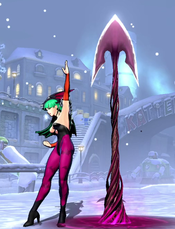 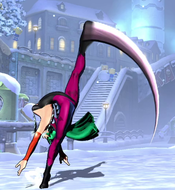 Upon a successful hit you'll see bats fly back to you as well as its distinct sound effect. 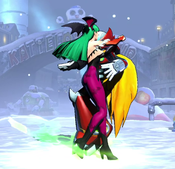 Morrigan's most (in)famous team compositions feature her as the point character. As players start with a bar of meter already available, she can activate Astral Vision very early in the match and shut an opponent down before they ever get a chance to capture momentum. Additionally, having access to two different assists - one to cover the air and one to cover the ground - significantly improves her zoning game and can patch any holes in her fireball pattern that may appear.

Despite being such an effective point character, she is sometimes also played in the second position, especially behind a character that is good at stalling. This allows Morrigan to build meter by repeatedly spamming her Dark Harmonizer assist, which deals no damage but uniquely builds a large amount of meter. This meter can then be used by Morrigan herself or for the other characters on her team. Morrigan has won no shortage of majors as both a point and second character, so neither role is particularly limited in effectiveness.

Doctor Doom: The infamous "Morridoom" shell that swept every major tournament for over a year. Doom's "hidden missiles" assist perfectly covers the superjump height that is otherwise a weak point in Morrigan's fireball game. If Doom happens to find himself tagged in, his playstyle aligns exactly with what Morrigan wants. Doom can run away and build meter using Flight and projectile specials, then throw out one of his safe Level 1 Hypers to DHC back to Morrigan with Astral Vision. Also allows Morrigan to kill with Doom's TAC infinites from anywhere on the screen. A well-executed Morrigan/Doom team is borderline impenetrable. Doom is out for a while during hidden missiles, so it is up to the Morrigan player to protect him with either Soul Fists or by crossing over the opponent so Doom is behind them instead.

Vergil: Even on block, Vergil's Rapid Slash assist will drag the opponent all the way to the far end of the screen. This is especially frustrating when called by a strong keepaway character like Morrigan. Opponents will slowly inch forward against Morrigan's fireball pressure, constantly bleeding chip damage along the way, then block a Rapid Slash and be sent all the way back to the end of the screen. Gives access to one of Morrigan's most easy and consistent Soul Drain loops. In addition dark harmonizer assist, giving Vergil access to meter to use for summon sword and putting them into block pressure

Chun-Li: Chun has a double-jump and triple-jump, as well as multiple aerial specials that keep her airborne or even let her climb higher, like Spinning Bird Kick and Tenshokyaku. These allow her to stall and run away in the air for a long time, even without using a superjump. A point Chun can run away for a long time while Morrigan repeatedly builds meter on the ground with her Dark Harmonizer assist. Additionally, both of these characters have fairly consistent TAC infinites from both midscreen and corner positions. If either of these two get a hit, they can always TAC to the other to secure a kill.

Phoenix: The infamous X/Morrigan/Phoenix team is quite potent, by running Morrigan as a meter building engine through the usage of the quick acting Dark Harmonizer assist, you can quickly build 5 bars to reach the goal of Dark Phoenix nearly every game. Combined with Morrigan's TAC infinite to get meterless kills, few teams have answers once Phoenix reaches 5 bars on top of potentially still having to deal with a full life team. Even playing Phoenix without the 5 bars is still great though can be difficult given her mobility and tools in the event your first character dies. You can also easily tag out your first character for Morrigan with Astral Vision. Even without an assist to support Morrigan, Astral Vision still shuts down many characters.

MODOK: Similar to Chun above, MODOK is notable as a character that can stall in the air for a long time without using superjump, thus leaving assists available and allowing him to rapidly build meter with a backline Morrigan. In MODOK's case, he has two different flight modes to work with: one granted by his jump and another through his 214S command. Modok can float above superjump height for a very long time.

The most basic/foundational Soul Fist pattern. Puts horizontal fireballs at both ground and regular jump height. Low risk, can be done from any spacing, and is generally sufficient to shut down the opponent's ability to call assists. Can usually call assists safely after landing from the Unfly Air Soul Fist. L Soul Fist is basically always preferred over M Soul Fist, as the slower speed means it stays on screen longer, helping to limit the opponent's movement options.

Diagonal L/M Air Soul Fists remain a meaningful threat on the screen for longer than the purely horizontal H fireballs do, but require that Morrigan be ready to protect herself with j.5S or Missiles if necessary.

Anti-Superjump pattern. Opponents will commonly flee to superjump height to stall out Astral Vision, as Morrigan's fireball patterns are much less threatening there. Normally, an opponent can land from their superjump, block only ~2 fireballs, then immediately superjump back up to safety. This pattern forces the opponent to block significantly more projectiles as they land, and can keep them trapped on the ground for longer. Use an airdash - either a fully held downwards airdash or a shorter upwards one, to place Morrigan just above her regular jump height. Use Fly/Unfly to place two fireballs at this height as the opponent is landing. They will be forced to block these fireballs, then land directly into the rest of your pattern, forced to endure it.

Video Timestamp No-Astral pattern designed to protect Morrigan's assist calls so that she can safely activate Astral or reposition. Many opponents are looking to punish Morrigan's assist calls with a fast projectile or beam assist of their own. Done correctly, this pattern puts 15 points of projectile durability at ground level simultaneously - the air L and M fireballs reach the ground at the same time, and then Morrigan's grounded fireball is shot behind them. This is enough to nullify most non-hyper attempts to snipe Morrigan's assist, and the assist in turn will protect Morrigan while she activates Astral Vision.

Video Timestamp. Morrigan can Fly-cancel a single fireball then repeatedly plink dash in order to stay very close to the projectile, protecting herself from attacks while either approaching or escaping to the opposite side. As a bonus, if this fireball actually hits the opponent, Morrigan can use j.5H or j.5S to confirm into a full combo. If the opponent pushblocks your fireball, you can continue to airdash into them, then throw them out of pushblock recovery for a Guard Break.

Video Timestamp 1. Match Example. Low commitment pattern that is good against primarily-grounded characters like Wolverine or Haggar. Has the advantage of some built in cross-up protection, as j.5S will auto-correct to the proper side if the opponent somehow navigates behind Morrigan.

This easy combo is a great way to get started with Morrigan. It's pretty simple and works across all characters. It doesn't have the more advanced things such as Soul Fist fly airdash while also still doing similar levels of damage and meter gain. This combo should be done whenever you get a happy birthday as the move advanced Soul Fist combos will not work since Soul Fist only hits one character. You can easily adjust this for your needs in various ways. You can cut out the second rep of j.5M > j.5H > j.5S if you want to make it easier on yourself or if you feel the initial hit is at a weird angle etc. Often times you will not be using the Finishing Shower super to end the combo unless it is to kill a character. You will usually be going for j.623M > j.214S > j.5S and then with the knockdown you will activate Astral Vision (22XX) to get your zoning game started or possibly j.623M > j.214S > j.5H into TAC for a TAC infinite or combo.

Video Timestamp/Guide. Slightly more optimized jump loop using Fly/Unfly fireballs for additional damage. Keep in mind that a fireball can only hit one character, so this combo does not work in a Happy Birthday situation, while the previous combo will work.

Video Timestamp/Guide. Similar to above, uses an alternate route that eliminates most j.5M hits for more damage but less meter gained.

Video Timestamp/Guide. Shadowblade loop. Has an advantage over other combo routes in that it can also easily confirm against opponents that are airborne, although it is easier if they are grounded.

Video Guide. Soul Fist loop is corner-only, but you can start the combo midscreen as long as you have pushed them into the corner before starting the grounded 236H. Otherwise, go directly into 5S Launcher. As with other routes, Morrigan can follow up a corner Finishing Shower with Shadow Blade or TAC for extra damage if desired.