Douglas Jay Falcon, or Captain Falcon, is everything defining about melee turned up to 12. Fast as lightning, nigh impossible to control at first, almost always jumping around, and incomparably flashy. There's a reason he's a fan favorite. He has a simple, strong toolset with some of the best moves in the game along with being able to tank a lot of hits due to his weight. His noticeable flaws include a lack of powerful grounded moves, slower than average start up on his otherwise incredible aerial attacks, along with the weakest defensive options of the top tiers. In other words, he’s Melee's gorilla. A character of extreme strengths and weaknesses.

Given his relatively linear moveset, he has to creatively use his movement to dance around his opponent and position his moves appropriately. This is made all the more difficult by how unwieldy his excessive speed, both in the air and on the ground, make him. However, no character is able to take a little momentum in a match and run with it quite like Falcon. Once he gets a solid hit or grab, he can feel truly unstoppable. And, like all melee characters, he has limitless depth with new tech and strategies being discovered to this day.

Make no mistake however, when zoomed out far enough Falcon's plan is quite simple. You run around spacing his gigantic aerials or try to grab the other guy. Then hit them really, really hard. Like a wise man once said, everyone has a plan until they’re kneed in the face. 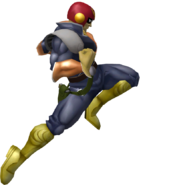 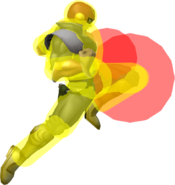 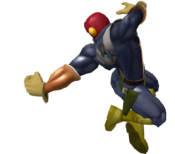 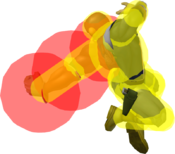 Overhead Kick
It's not my fault you jumped
uAir (j.8A) 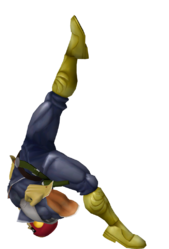 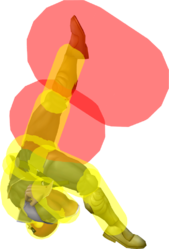 Raptor Boost
“Watch and pray, that ye enter not into temptation: the spirit indeed is willing, but the flesh is weak.”
sideB (4/6B) (Air OK)

This table shows the frame data for all of Captain Falcon's non-special moves. Including shield advantage at different timings and cancels.