It doesn't have significant utility because dash attacking can already be cancelled into something immediately, however it could be useful. 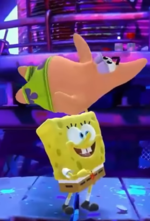 By pressing block and inputting an attack (or using the grab macro) you can perform a grab both on ground and in the air. Grabs bypass block and by grabbing an opponent you are able to Move freely and perform jump with the opponent still in hand, performing an air grab does not allow you to jump until you land but will still let you move. From this you are able to perform throws which damage the opponent and can lead to combos. Grabs can also be chained together

You can also Grab Incoming Projectiles by timing the grab to an incoming projectile, while holding a projectile you are able to perform the same actions as if you were holding a character player. Grabbed projectiles are also under a damage multiplier which makes them more powerful than initially.

Characters can dash by holding a direction for 10(?) frames. Dashing is faster than running. Characters can only perform a Dashing Attack when they are dashing.

The Uncanny ability to go quick

By Pressing block and inputting a direction mid-air you can perform an airdash, They start up frame 1, last 15 frames, and have 10 frames of lag upon landing on the ground using one. Although they grant no invincibility you can perform any action after the 15 frames. You can airdash only once during airtime and if you get hit out of it you are not able to perform another.

Downwards airdashes however are much different; as they are very fast and can be cancelled into any move during the 15 frames unlike normal airdashes. With this in mind you can perform techniques like Wavelanding and Wavedashing. 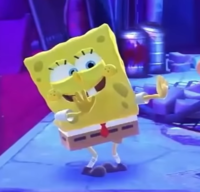 By holding down the Block button you character will enter an Indefinite blocking state, from this state you are unable to take any damage. However you are able to be pushed back and being pushed back to the ledge of a stage makes you enter Teeter which is a state that leaves you vulnerable to attacks for a lengthy period of time and be punished. 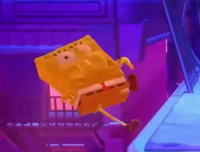 There are ways to circumvent pushback, such as timing the the block to the hit, or Holding by holding the direction of the attack while blocking. You'll know when you have performed this correctly when you see your character flash yellow shortly.

If you both hold time the guard to the hit of the attack and hold the direction of the attack, you will perform a Perfect Guard Which negates pushback and allows you to react and perform an attack immediately. You will know if you inputted it correctly with you character flashing light blue and a sound effect plays. Perfect Guard also still leaves your opponent in a recovery state of the attack they inputted.

Wavedashing has never been easier! In Nickelodeon All-Star Brawl, performing a wavedash is as easy as inputing block and jump simultaneously while holding your desired direction.

NOTE: You cannot already be holding block when inputing jump, otherwise you'll just jump. Both buttons need to be input at the same time

When you input a movement (any axial or diagonal movements), this information is stored for 127 frames. If you perform a neutral wavedash inside this window, you will wavedash that direction. The information is stored regardless of actual character movement, meaning the movement can be buffered during get-ups, ledge get-ups, in shield, and during attack animations to allow for less inputs for a mixup. A n-wavedash is performed by pressing block and jump simultaneously you will wavedash in the buffered direction.

NOTS: It is fairly easy to accidentally n-wavedash in an undesired direction due to snapback, input spaghetti. N-dashes only work while grounded. After 127 frames have passed, you will need to input another direction, else you will n-dash in place.

There is no way to walk in NASB. Players only run.

A taunt can be cancelled by performed by inputting taunt mid run towards ledge. Upon sliding to ledge, the taunt animation will stop and you will be immediately actionable. Air taunts can be similarly cancelled by grabbing onto ledge while airtaunting