< Garou: Mark of the Wolves

Kim Jae Hoon is the younger brother of Kim Dong Hwan, both of them together are the sons of Taekwondo Master, Kim Kaphwan. Unlike his older brother, Kim Jae Hoon is much more serious with Taekwondo and believes firmly in his fathers ideals of justice. Jae Hoon uses many of the same techniques his father before him used, such has the Hangetsu Zan and Hou'ou Kyaku, with a bit of an original spin of his own, adding his element of fire to his attacks to amplify the power behind his blows.

Jae Hoon enters the Maximum Mayhem tournament with his older brother Dong Hwan after their father, whom was visiting the newly re-built Second South, was attacked by an very strong oppenent and was injured. Jae Hoon swears to avenge his fathers defeat, and so, dragging Dong Hwan with him, the two compete in the Maximum Mayhem tournament with hope that one of them will be able to face the monster that defeated their father. 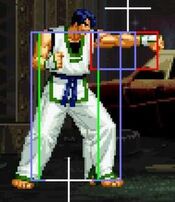 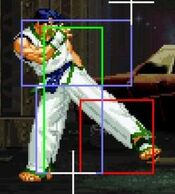 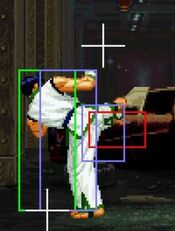 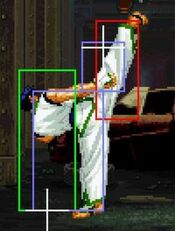 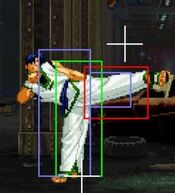 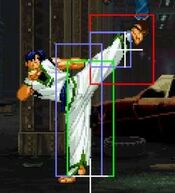 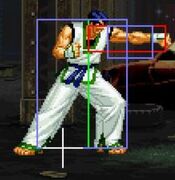 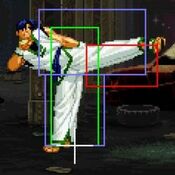 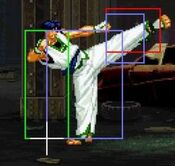 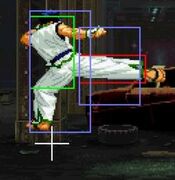 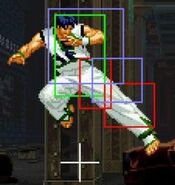 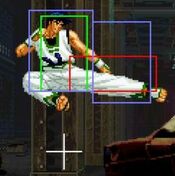 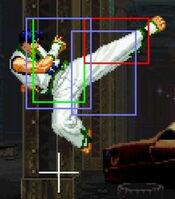 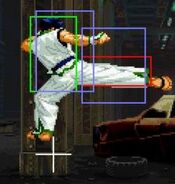 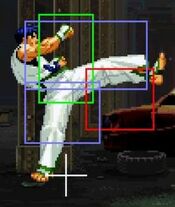 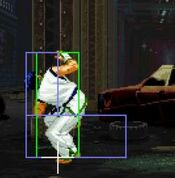 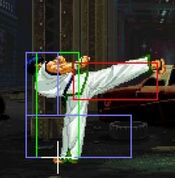 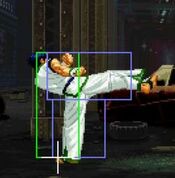 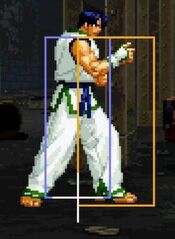 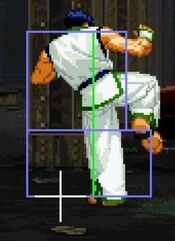 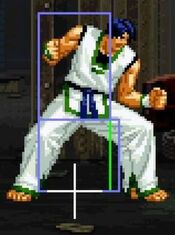 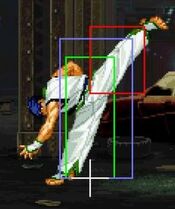 Jae Hoon performs a Neri Chagi (Axe Kick), it has a slow start up, but it has a near-instant recovery time after the kick is dealt, and it's an overhead.

Kim Jae Hoon plays a bit similiar to his father Kim Kaphwan in Real Bout Fatal Fury 2 in that he is mostly a close/mid range fighter and puts up an exceptional offense, and plays a fairly decent counter attack game. Jae Hoon can greatly punish his opponents when they leave themselves undefended, or throw themselves akwardly into an attack towards Jae Hoon, not to mention he has some exceptional mix up with his attacks.

His great array of normals help Jae feel comfortable in most situations. He has a great variety of pokes, many of which can convert into good damage with ease - 2b, 2c, j.d and 5a are the most exceptional, with other great options ike 2a, j.b and 5b seeing occassional use. In pressure, he has his variety of fast and plus on block light normals, along with his cl.c, cl.d and 2c which can be Feint Cancelled to gain significant advantage, making them essential for combos and pressure.

Jae Moon is greatly enabled in the corner, being able to tick throw more appropriately, getting more ambogious left/right mixups after throw, and getting longer combos due to more link options - he even gets an infinite! (cl.d 6ac microdash cl.d...)

However, Jae Moon's biggest weakness are his bad set of specials - aside from 236d thats used to end combos and [2]8b/d which are his breakable DPs, his specials are all pretty bad. This in turn makes his meter gain quite slow, especially considering his tool of choice to farm meter, [2]8b-br, is still quite slow and risky. This meter issue is significant due to how much his kick super compliments his gameplan.

His execution fundamentally is straightf9rward, so Jae is easy to pick up, but he has a high skill ceiling with heavy feint cancel combos in the corner and using kara cancels to chain lights into supers - even cr.a. While not nessecary at first, these are very rewarding techniques to land to play the character to his fullest potential.

With enough practice, patience, and dedication, Jae Hoon can be a fairly strong and effective character againest almost any opponent.

In-depth video lecture on Jae Hoon. Please use the timestamps to navigate the topics. It does in-depth about the utility of all of Jae's specials and normals as well as many techniques such as his combos, kara cancelling and his gameplan