Kyosuke Kagami is a teenager enrolled in Taiyo Gaiden high school. He's calm and level headed, and can calculate a plan even in a dire situation. When his friend Batsu's mom gets kidnapped, Kyosuke agrees to help find her. It turns out, a bunch of people in their city are being kidnapped. Together with their friend Hinata, Batsu and Kyosuke fight with the other schools to find out whats going on. Eventually, they find out that an elite school called Justice High is behind all the kidnappings. The three fight the principal, Raizo Iwamano, to free all the kidnapped citizens. The true fight isn't over yet, as the principal wasn't the true mastermind. It was actually Kyosuke's twin brother, Hyo Imawano, who wanted to create a utopian society in the town. Kyosuke is revealed to have been also behind all of the kidnappings, but had since changed his ways during his adventure with Batsu and Hinata, and had redeemed himself. Together, the three of them defeated Kyosuke's brother and saved the town.

Kyosuke is widely considered to be the worst character in CvS2. Depending on who you ask, he's either better or worse than Dan, but regardless he's bottom 2. He sadly has very little going for him, between his low health, relatively useless specials, and situational combos. What he does have is a few good pokes and flashy air combos. Kyosuke has a unique mechanic where he can launch the opponent into the air and continue his combo by cancelling air normals into eachother. These are both flashy and damaging, and make for a very unique and fun style of combos. Sadly, he only has two ways to start these: a weak launcher command normal and a super. This makes it so he can't consistently do his air combos, and without them, his damage is very weak.

Kyosuke is a character with plenty of flaws, but if his air combos truly speak to you, or you just really like Rival Schools, don't feel too afraid to play him. Just make sure your other two characters are top tiers, and be ready to play with mostly them usually.

Best - K/C: K-Kyosuke gets access to run, hop, and Rage. Rage makes his air combo potential a lot scarier, as he can confirm into a level 3 launcher super or end his damaging air combos with a level 3 air super for big damage. JD allows him to punish a bit more often with his 3HK launcher, and overall the mobility aids his rushdown a lot. C-Kyosuke sacrifices the movement for more ways to combo into his launcher super, stabilizing his air combos a lot. He can also launch with launcher super and end with air super, and still have a bar left when he lands. Alpha Counters and rolls do assist a lot as well, and roll cancelling his 214K specials makes them much better as anti-airs.

Useful - N: N-Kyosuke gets a bit of both K and C. He gets the movement of K, and the super usage of C. Infinite level 1 launcher super makes his combos a lot more stable, and generally helps his damage game. Rolls also give him RC Kick, which is a much better anti-air. He still struggles in most situations, but he can at least use his supers more often.

Worst - P/S/A: P-Kyosuke would be useful on paper, but 3HK has pretty pitiful range, and never having a super to launch with means P-Kyosuke has a horrible time off of parries. S-Kyosuke has a similar issue, and while infinite level 1's help, being at that low health with a character this fragile means you won't get to play with them for long. A-Kyosuke is very bad, his Custom Combos are very low damage compared to the rest despite being very flashy. Kyosuke would rather spend the meter on a launcher super or an air super than Custom Combo anyway. 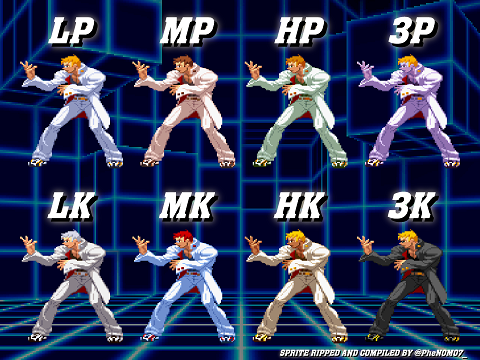