Chang and Choi are surprisingly versatile between Grooves. Generally, C-Chang and N-Chang are considered his strongest Grooves. C-Chang gets strong neutral, and consistent access to his supers. While Chang struggles to get consistent knockdowns meterless, his super helps with this a lot, and Choi super is very strong as a way to chip out opponents and force mixups. His level 2 to level 1 cancel does insane damage as well, making it a much scarier punish. Roll also gives him RC Ball and RC Choi specials, which are very useful. N-Groove maintains his access to supers and rolls, but gives him extra movement ability which greatly enhances his mixup. In exchange, he loses the high damage level 2 cancel and access to airblock.

K-Chang, A-Chang, and S-Chang are all very viable Grooves as well. K-Chang loses roll and consistent super access for scarier movement, and JD lets him punish things using his command grab or super more often. Rage can be scary, as Chang's damage becomes much more respectable, but you lose access to rolls and basically never use Choi super. A-Chang never supers in general, but gets access to one of the highest damage CC's in the game, and has a lot of versatile ways to use it. CC mixed with Choi pressure is especially scary, but you sacrifice using supers at all. S-Chang gets as many supers as he wants at low health, and this isn't a huge risk for a top tier health character. He can safely charge in neutral as well, and throwing out Choi can cover his charge making it much safer than the usual S-Groove character. Infinite Choi super is scary, but you lose out on consistent meter gain and have to deal with S-Groove mechanics in general.

P-Chang is much, much worse in comparison. Parries are useful, but they are the only benefit, and Chang isn't a scary punish character so they don't benefit him much at all. Lack of supers, weak meter build, and no real defensive or offensive options besides parry makes P-Chang easily the worst. Dai Hakai Nage -HCB, f + K- Choi rushes forward and forms a human tornado with spinning claws. A bit slow on the startup but extremely good for pressuring. When Chang is calling Choi to execute this special, there is a slight moment where he stands there, unable to move or defend, so should not be used blindly.

Tekkyuu Dai Bousou -QCF, HCB + P- Chang rushes forward and on connect, begins to ravage his target with blow after blow from his iron ball. Does 5200 damage at level 3. WARNING: Leaves Chang WIDE OPEN when blocked. When blocked, Chang bumps into the target and falls over clumsily (-47!!!). Do not throw this out blindly as you will be punished severely. Can be comboed into using c.mp/c.mk/s.mk/c.fp and acts like Iori's rush super as in it sucks you in.

Shin! Chouzetsu Tatsumaki Shinkuu Zan -HCB, HCB + K- Choi rushes forward and does a much stronger version of his Dai Hakai Nage. Its primary use is for breaking guard and chip damage. Useless otherwise because of heavy, heavy startup. Extremely abusable in S-Groove and after knockdowns.

This is by far, the easiest combo in the game to do as you only push one button, and you push it as fast as possible. Does around 1700 damage. Usually two punches and then the spinning ball will come out.

This can only really be used off a dizzy or a huge mess up on your opponents part. Chang only has one special cancellable normal that's not a short or jab, and it's s.hk(close).

This is the most reliable way to land chang's super w/o relying on randomness or a huge mess up by your opponent. A fairly easy combo to pull off, it helps to hold down c.lk and then execute the super using mk. 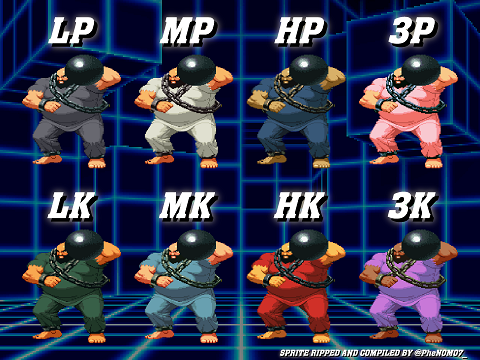