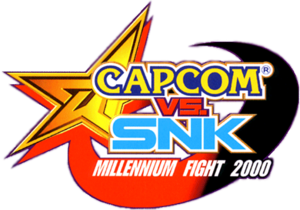 Released in 2000, Capcom vs. SNK: Millenium Fight 2000 is a fighting game developed by Capcom for SEGA's NAOMI Arcade system, with its main draw being the first arcade fighting game that would pit characters from Capcom's popular fighting game series, Street Fighter, with SNK's popular fighting game series, The King of Fighters. Just like in SNK'S King of Fighters series, players were able to form teams of (up to) four characters, using a brand-new Ratio system at the time. Nowadays, this game is seen as little more than a footnote for the much more popular and more memorable sequel; Capcom vs. SNK 2.

CvS1 Pro would be ported to the Dreamcast again in 2000, this time only in Japan. A year later, in 2002, CvS1 Pro would be released across the world...on the original Playstation. Because of the limitations of the PS1 compared to the NAOMI/Dreamcast, the PS1 port was a much weaker port, with compressed sprites, lower graphics quality and actual loading times between rounds and matches.

Making its first appearance is the groove system, in a much more basic form. There are two grooves to choose from, the Capcom groove (Based on SFA3's A-ISM) and the SNK groove (Based on KOF '94). The only difference between the two grooves is the meter and how it's used. The Capcom groove grants you 3 stocks of meter, allowing for 3 levels of super. You build meter by attacking and performing special moves. Your meter will also fill up (though at a slower rate) when you take damage. The SNK groove has a little bit more going on. In the SNK groove, you need to manually build your meter (Though you do still gain meter when taking damage) by pressing HP and HK simultaneously. Once you have build max meter, it will slowly deplete over time, and you will have access to 1 level one super. However, once your health is at critical level, and your lifebar is flashing, you will have unlimited access to level 1 supers without meter. While in this critical state, if you have a fully charged meter, you will have access to level 3 supers.

Capcom vs. SNK would be the first game to introduce a Ratio system. Though similar to CvS2's, the ratio system here is more restrictive, as characters have an assigned ratio from 1 to 4, which cannot be changed (Outside of the home release's versus mode). Like CvS2, your team composition must fill up 4 ratio slots; no more, no less.

The majority of characters in Capcom vs. SNK 1 have alternate versions; called "EX versions". EX versions of characters have different moves than their regular counterparts (often-times Special Moves and Supers, but sometimes even Normal Attacks and Command Normals).

To select EX characters, hold the START button when selecting your characters, and you should see the NORMAL turn into EX. This means that if you select them, you'll select the EX version of your character. Releasing START will let you select their NORMAL variants. Not all characters have an EX version (for the purposes of this wiki, this includes Ryu and Iori's evil counterparts). Keep in mind that, with the exception of the Dreamcast version of Capcom vs. SNK Pro, you will need to unlock EX Characters for use beforehand.