Grapple Hammer is a weapon that freely allows itself to do damage at safe ranges, while also having easy combos for anyone to pick up. 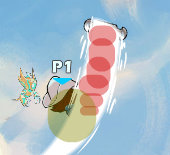 I could always use a good pick me up.

Generally when you play hammer, your goal is keep your opponent at a distance until you want them to be in your personal space. So that would consist of doing nairs when they are slightly above you, and throwing out a lot of sairs, if you time it right you can hit your opponent on the ground and potentially go into something like dlight to get something like sair, gc nlight or slight. Be careful doing weapon throws because it doesn't hit point blank like most weapons, which makes hard to properly follow up on.

Hammer's Edge Guarding is fairly strong with Ground Pound doing a lot of damage and has a lot of priority and force. Certain characters have signatures that has a small hitbox that will hit opponents that are hugging the stage wall. Down light can also perform this. Hammer's recovery can also kill characters off stage but is a bit risky since you would have to go under the opponent to land recovery which can be punished if they see it coming.