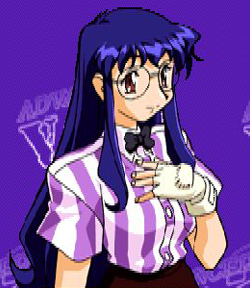 Kaori is very smart. You can tell because she wears glasses and has an infinite she can start from a divekick.

Kaori is often regarded as the best character in the game, and not without good reason. Her incredibly easy and consistent infinite combo is what she is most remembered for, but even putting that aside, she's a very strong aggressive rushdown character who lives for corner pressure. While her selection of strong footsie normals is on the low side, and her aerial presence is somewhat underwhelming, she can get a lot of mileage out of playing a basic "fireball and anti-air" game with Ressenshuu and her cr.HP. Once she pushes her opponent to the corner, she is able to run a very powerful offensive rushdown with staggers, divekicks, a proximity unblockable and two instant supers. Those instant supers also combine with her exceptional guard cancel options to create a character that is very well-rounded in the close range. If you're looking to follow the advice of Santhrax and pick a top tier, you can't go wrong with Kaori.

b+HK: Command overhead. Hits twice, first hit isn't overhead but (mercifully) whiffs on crouchers. Slow to come out, but cancels into specials so it's a pretty good mixup option if they're sitting still.

f+HK: Slow side kick. Big on startup and recovery, and doesn't cancel. Not much use for this one.

j.d+HP: The all-important divekick. Can be done from any jump, but only from the jump's apex -- no sooner or later. Hits up to three times, has basically no landing recovery, so you can very easily combo or start pressure from it.

j.d+HK: A stomp kick much like Chun-Li's. Only available from diagonal jumps, and it's hard to use since it bounces you away from the opponent, and you can't perform other moves after using it, but it can be a good hitbox to stick out if you're in the air.

LP guard cancel is the most useful as it easily leads into any combo you can think of. The LK version has its uses as well, specifically if you need to create a bit more space between you and your opponent.

Ressenshuu (qcf+K): Kaori's projectile. You'll be getting a lot of mileage out of the LK version, since its travel speed and low recovery make it incredible for covering your approaches. The HK version isn't half-bad for this either, and it helps to be able to vary your timing in a fireball war. The EX version is an instant super that very easily confirms into a lot of different combos, but the second hit has a propensity to whiff at point blank in the corner, so be mindful of your spacing.

SECRET Ressenshuu (f,qcf+K): It's basically the HK version of Ressenshuu but it does more damage and builds way less meter. Useful for further varying your fireball timing in neutral, but like most of these moves, it's not a huge deal.

Enkenfuu (qcb+K): Kaori's version of a tatsu. The LK version hits overhead, but it doesn't knock down, and the opponent often recovers well before you do, so this will often get you punished. The HK version is a mid, and much safer on block (punishable only by instant supers), but it's mostly used in combos. The EX version deals a lot of damage, but you won't be able to land the full thing in a juggle combo, so it's best to confirm into it on the ground.

Ryuurentai (close dp+HK): Kaori's proximity unblockable. 1F startup with no whiff animation, so it's pretty safe to go for in a lot of cases. Leads to a Retsuzandou midscreen, and an OTG pickup in the corner. Going for this after a divekick is very strong.

Retsuzandou (f,hcf+K): Basically a ranbu super. It's instant, but it's unique among instant supers in that it's the only one in the game that doesn't allow the opponent to buffer reversals during the superflash, meaning it's completely guaranteed in a lot of situations where the opponent might otherwise have a way out. Combined with the huge damage, this is one of the tools that makes Kaori as terrifying as she is.

Kaori's biggest weakness is that she suffers from a very linear footsie game, due to poor reach on most of her grounded buttons, and a series of aerial buttons that aren't really all that different from each other. However, she's blessed with a fantastic fireball and a highly-rewarding anti-air normal in cr.HP, so a lot of her neutral will be based around using these two tools, forcing space control her fireball and swatting people out of the air if they try to move around it. For jump angles that cr.HP can't catch, try more unorthodox methods of punishing jump-in attempts, like throwing another fireball, or making the opponent eat an instant super during their landing recovery. Once you've restricted the opponent's movement and pushed them to the corner, you can open up your offense by applying stagger pressure. The main way Kaori will be opening people up is through frame traps mixed with throw/Ryuurentai, and catching chicken-block attempts from the opponent with f+HP and cr.HP. You can very easily start this up by applying normal strings cancelled into LK Ressenshuu, as the frame situation here is very good for you. You'll have a very easy time locking people down once you get going, so make sure you're ready to capitalise on the opponent's defensive mistakes.

Do this if you're okay with not being cool. Otherwise, do the combos above.